The 2021 GRAMMY® for Best Classical Solo Vocal Album was awarded to The Prison, a choral symphony by Dame Ethel Smyth that features soprano Sarah Brailey along with bass-baritone Dashon Burton and James Blachly conducting the Experiential Orchestra and Chorus. WORT listeners will know Sarah as a co-host of Musica Antiqua, but she is involved in several other Madison-area groups as well: Just Bach, the Handel Aria Competition, and Grace Presents. After winning the award, Sarah was interviewed by Alan Muirhead, another co-host of Musica Antiqua. 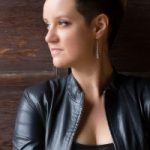 How did you get involved with the project to record The Prison?
I met James (conductor/composer James Blachly) about five years ago when I sang one of his songs on a concert at a Trinity Wall Street music festival. As you know, the community of classical performers is quite small so we knew of each other, but this was the first time working together and we both enjoyed it immediately. He told me then that he was working on this project and had already involved Dashon Burton, who was a friend of mine, and he said that he’d like me to sing the soprano part. After lots of fundraising, we were able to record it in February 2019 at SUNY-Purchase. By then I had moved to Madison, so I was able to work on the role with (UW faculty member) Paul Rowe, which was great. The recording was released in August 2020, to coincide with the 100th anniversary of the 19th amendment, in honor of Ethel Smyth’s work with the women’s suffrage movement in the UK.

What can you tell us about the music?
Ethel Smyth studied in Leipzig and had met Dvorak, Brahms, Clara Schumann, and others. Her music is late Romantic in style, almost like Mahler or Brahms at times in terms of orchestral size and color. She called the piece a symphony, but it doesn’t have separate movements in the traditional sense. It’s very through-composed and it doesn’t really have any individual arias or choruses as standalone pieces. She was going deaf and this is the last major work she wrote. The text was by her longtime friend and likely lover Henry Brewster, who had died some years before. It deals with the meaning of life and knowledge of approaching death, so it meant a lot to her.

What else can you tell us about her?
She had to overcome her father’s opposition to become a composer, and ultimately became the first female composer to be granted damehood in the UK (in 1922). Her opera Der Wald was performed at the Metropolitan Opera in New York in 1903 and was the only opera by a woman composer to be done at the Met for more than a century. Yet during her lifetime, her music was criticized for being both too feminine and too masculine. She also became very involved with the women’s suffrage movement and was good friends with Emmeline Pankhurst. In 1912 she was arrested at a violent demonstration and served two months in prison. The story is told that when the famous conductor Thomas Beecham, who was both her proponent and a friend, went to visit her there, he found suffragettes marching in the quadrangle and singing her “March of the Women” which had become the official anthem of the women’s suffrage movement in England. Smyth was leaning out a window conducting the song with a toothbrush. She was quite a woman.

How did you prepare for the role as the soul of the prisoner who is facing his own death?
I studied the text and let the words guide me. There is one section that’s very chant-like, where I have to intone the text on one fairly high note for several pages. I like to think that my experience as a church musician helped me pull that off.

You represented the project on the Grammy Award show. How did that happen?
That’s kind of funny. James, Dashon, and I had a very midwestern-type conversation, even though the other two are not Midwesterners. Dashon and I said that James should represent it on the awards show, since he had worked so hard to make it all happen. James said no, it should be one of the soloists. Dashon said he had already won a Grammy, so he thought it should be me. We went round and round, and I guess you could say that I lost. It’s a unique piece that really could have been submitted in numerous Grammy categories including Best Orchestral Performance or Best Choral Performance, but ultimately it was submitted in the Best Classical Solo Vocal Album category.

What’s next for you? Will winning the Grammy mean more gigs?
I hope so, of course, but in the time of COVID-19, nobody has many gigs. Venues are closed, lots of groups have gone out of business, it’s really bad. I hope that everyone realizes how much they have turned to the arts for comfort or solace in these hard times and that they recognize how important the arts are. We hope that when concerts and shows start to happen again, people will support us by showing up and also by contributing.

In the meantime, you are keeping busy.
Well, yes. I’m involved in several things while finishing up my dissertation at UW-Madison. I’m one of the co-founders of Just Bach, which puts on free concerts every month during the school year. We used to do the concerts for live audiences at Luther Memorial Church, but now we record them there and put them on the internet on the third Wednesday of each month. You can see them at justbach.org. I’ve also become the Artistic Director of the Handel Aria Competition that Orange and Dean Schroeder founded and which I won back in 2015. After having to cancel last year’s competition, we are eagerly planning for this year’s final round, which is scheduled for August 20, 2021. I’m singing at the Green Lake Music Festival in June and I’m planning to head to Boston in July for a recording with my own group, the Lorelei Ensemble. I really hope I’m vaccinated by then!

Right now I’m very excited by a new role as coordinator of the monthly Grace Presents series that James Waldo had been leading. The next program will air on the Grace Presents YouTube page at noon on March 27. For this program I’ll be singing with soprano Kristina Boerger and Brandon Acker playing the lute and theorbo. Madison audiences may know Kristina from her several appearances at the Madison Early Music Festival (MEMF); Brandon grew up in the Madison area, also attended MEMF, and now lives in Chicago. We will perform a variety of early music, including some songs by Machaut. The series originally invited everyone for live concerts at the beautiful Grace Episcopal Church on Capitol Square, but now we have to record the concerts ahead of time instead and post them online. The costs of recording in HD video are high, so fundraising and contributions are much more important.

What was it like waiting to hear from the Grammy people?
The waiting before the ceremony was all solitary, with just a handler in my ear telling me to get ready when my category was approaching. After the ceremony the winners went into an online holding room, while we all waited to do press interviews. That was pretty surreal, chatting with Chick Corea’s wife and Maria Schneider (Grammy-winning composer who is ‘a fellow Eastman grad and exceedingly lovely’) and being in the same “room” as Ice-T and Bobby Rush.

You are from Wisconsin and went to UW-Madison before going to New York City to start your career. Why did you decide to come back to Madison?
I went to Eastman for undergrad and UW-Madison for my M.Mus., then I moved to NYC. I came back to do my doctorate to prepare for an eventual teaching career in academia when I decide I want to perform less. (Which isn’t happening anytime soon!) I chose UW because I knew Paul was a great teacher and mentor, and UW has good graduate funding. It’s also close to my family.

Thank you very much for finding the time to talk with us. I bet that your phone is ringing off the hook right now, with everyone congratulating you or press calling to ask you questions.
You are very welcome. 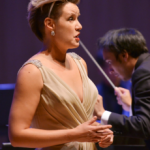 The Prison is a vocal symphony about a wrongly accused prisoner (Burton) by composer and suffragette Dame Ethel Smyth (1858–1944). The Classic Review calls Sarah’s performance as the prisoner’s soul “haunting at times and hopeful in others” and “delicate and veiled in ephemerality.”

WORT Music Director Sybil Augustine notes “We are so happy for Sarah and very proud of her achievement–WORT has had several Grammy-nominated volunteers over the years, but she’s our first Grammy winner! You can hear Sarah next on April 4 on Musica Antiqua, WORT’s early music show that she hosts every third week on Sundays from 8 am-11 am.”