Two studies published in late August in Clinical Infectious Diseases highlighted the role of airborne spread of COVID-19 and the importance of efficient ventilation systems.

One study found that patients exhale millions of viral RNA particles per hour in the early stages of disease and the second study tied an outbreak affecting 81% of residents and 50% of healthcare workers at a Dutch nursing home to inadequate ventilation.

What does that mean for WORT?

These studies confirmed what many scientists suspected–that surface transmission (on tables, phones, etc.) accounts for few COVID-19 cases and that the virus is mostly spread through small droplets of exhaled breath.

How did we improve ventilation at WORT?

We knew we needed to update our ventilation system to make it safer for staff, volunteers, and guests, even though the new systems are not cheap.

Yesterday, October 2, we added a system that exhausts inside air to the outside. It uses a heat exchanger to pull any heat out of the air before sending it outside. Simultaneously, it pulls air in from the outside (and heats it) to increase the turnover of our inside air. This is connected to HVAC systems that serve the studios, master control, and the vinyl library. This will help us significantly increase the turnover of air in the WORT building.

In addition to installing the new air exchange, we (and by we, we mean Jeff from Harker Heating & Cooling) 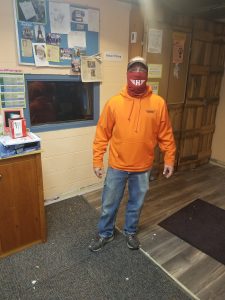 also installed Needlepoint Bipolar Ionization devices in each of the three HVAC systems that serve our building.

What is needlepoint bipolar ionization?

Needlepoint bipolar ionization is a technology that produces a stream of ions that can capture gaseous and particulate contaminants in the air, including volatile organic compounds (VOCs) and odors. Negative and positive ions are produced when electricity is applied to a tube with two electrodes, which in turn react with water vapor and oxygen in the air to create free radicals. These free radicals can kill microorganisms, including COVID 19, and break down odors, improving indoor air quality.

Urban Land Interests recently installed these devices in their offices and many of their tenant restaurants, such as Lucille.

Bipolar ionization has been around for decades. The older style of generators used perishable glass tubes and created potentially harmful ozone during the process. However, needlepoint modules, developed in the mid-2000s, do not create harmful levels of ozone. They are tested in accordance with UL 867, which limits ozone to 0.05 parts per million by volume. 6

We believe most buildings will need to install similar systems in order to offer good protection against COVID and other virus transmissions. Although installing these systems was not cheap, we want to make WORT as safe as we can, one step at a time.