Last year there were fewer total crashes in the city of Madison, but 2020 also the highest number of fatal crashes over the last five years. That’s according to a new report released by the city’s Traffic Engineering Division.

The current 5 year average for fatal crashes is nine crashes, with 2020 having the highest number of fatal crashes within the last five years. In comparison, there were 33 fatal crashes throughout all of Dane County in 2020.

Those and many more numbers are included in a 2020 “crash facts” report, presented at last night’s Transportation Commission Meeting.

The report provides details of all reported crashes that took place in the City of Madison last year. The report defines “reported crashes” as any crash that caused injury as well as at least $1000 in property damages. The report also only looks at publicly owned streets, so not privately owned roads or those maintained by UW-Madison. 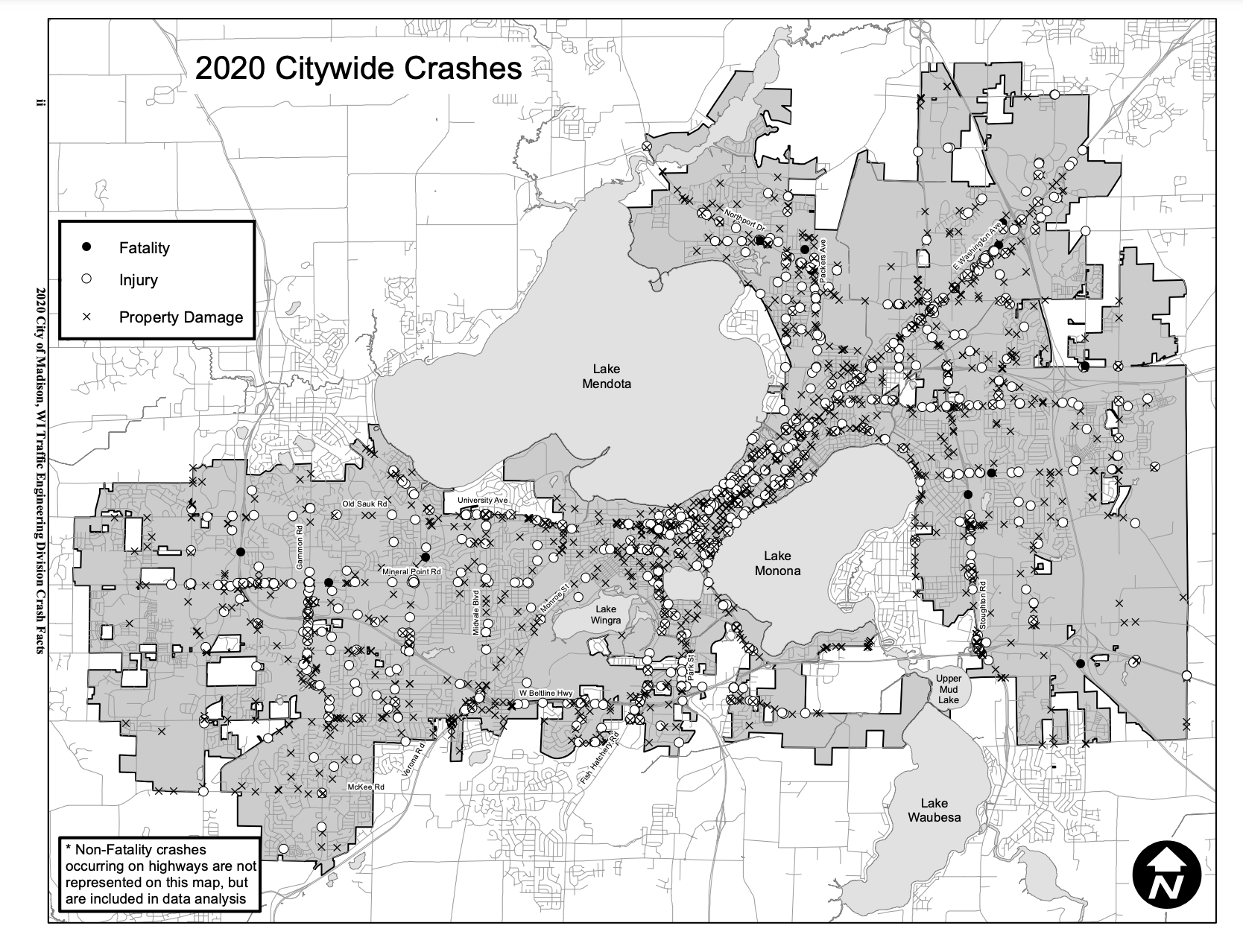 The report is given every year, but has received some updates as part of Mayor Satya Rhodes-Conway Vision Zero plan, which aims at eliminating traffic deaths on city streets by 2030.

“It’s all statistics that drivers can use to find out what mistakes other drivers are making. It’s also our starting point for analysis when we do street projects or safety projects, ”says city Traffic Engineer Mark Winters.

In total, 12 crashes led to 15 fatalities, out of a total 3,309 total reported crashes in 2020. That’s fewer crashes than the 5 year average of 4,862 crashes. Although the data was collected over the COVID-19 pandemic, average weekday traffic numbers had stayed roughly the same, according to the report.

At intersections, there were 2,037 vehicle crashes last year, 622 of which caused injuries and seven led to fatalities. According to the report, a majority of those crashes occurred at traffic lights, 56%. Of the top 30 highest crash intersections in the city, only one was not with a traffic light. That would be the intersection of Schmederman and East Washington Avenue, which has a stop sign.

The intersection of Buckeye and Stoughton road on the city’s east side saw the highest number of crashes, for a total of 29. Other intersections that saw high crash rates were Gammon and Watts Road on the west side, Stoughton Road and East Washington Avenue, and West Johnson and Park street. 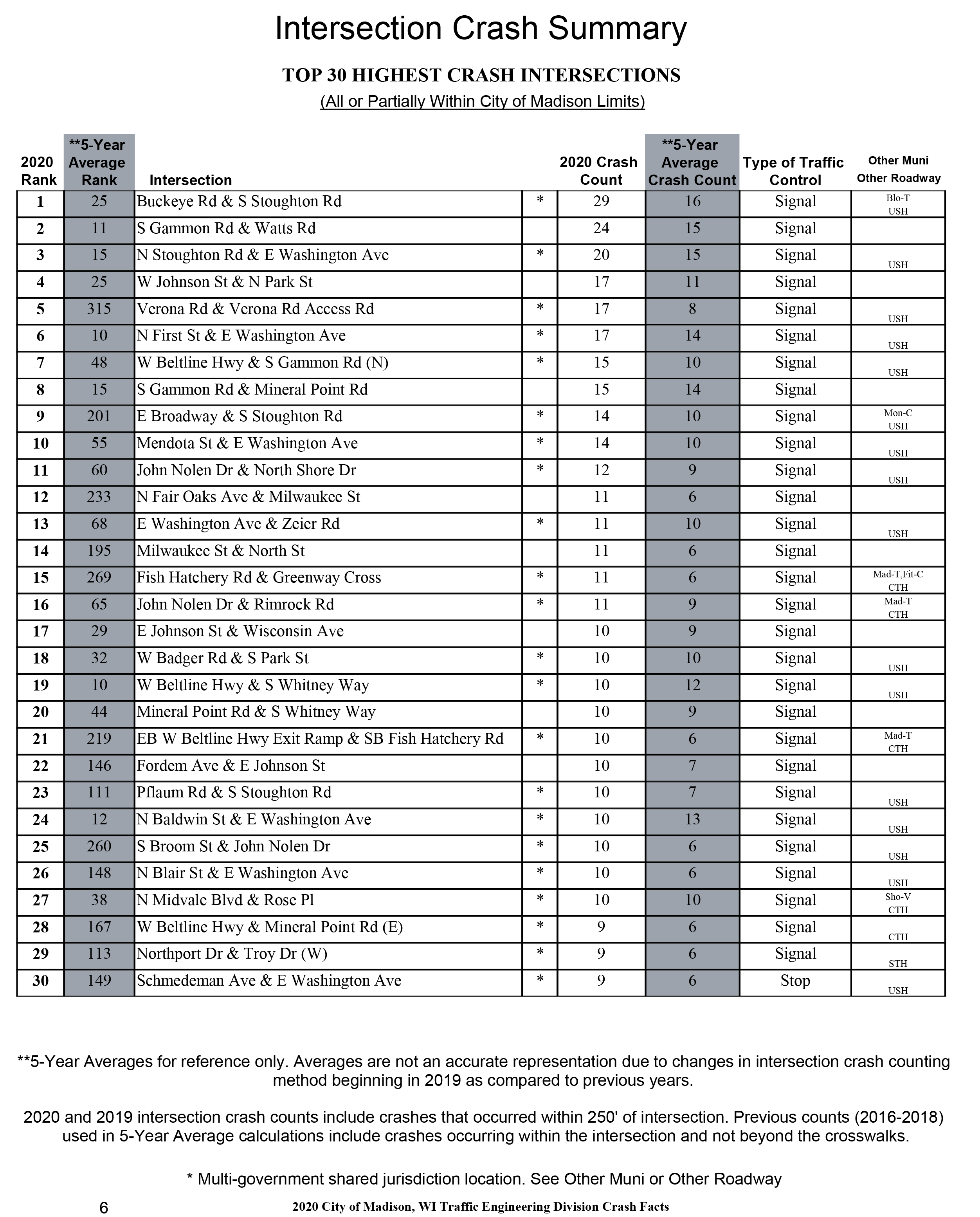 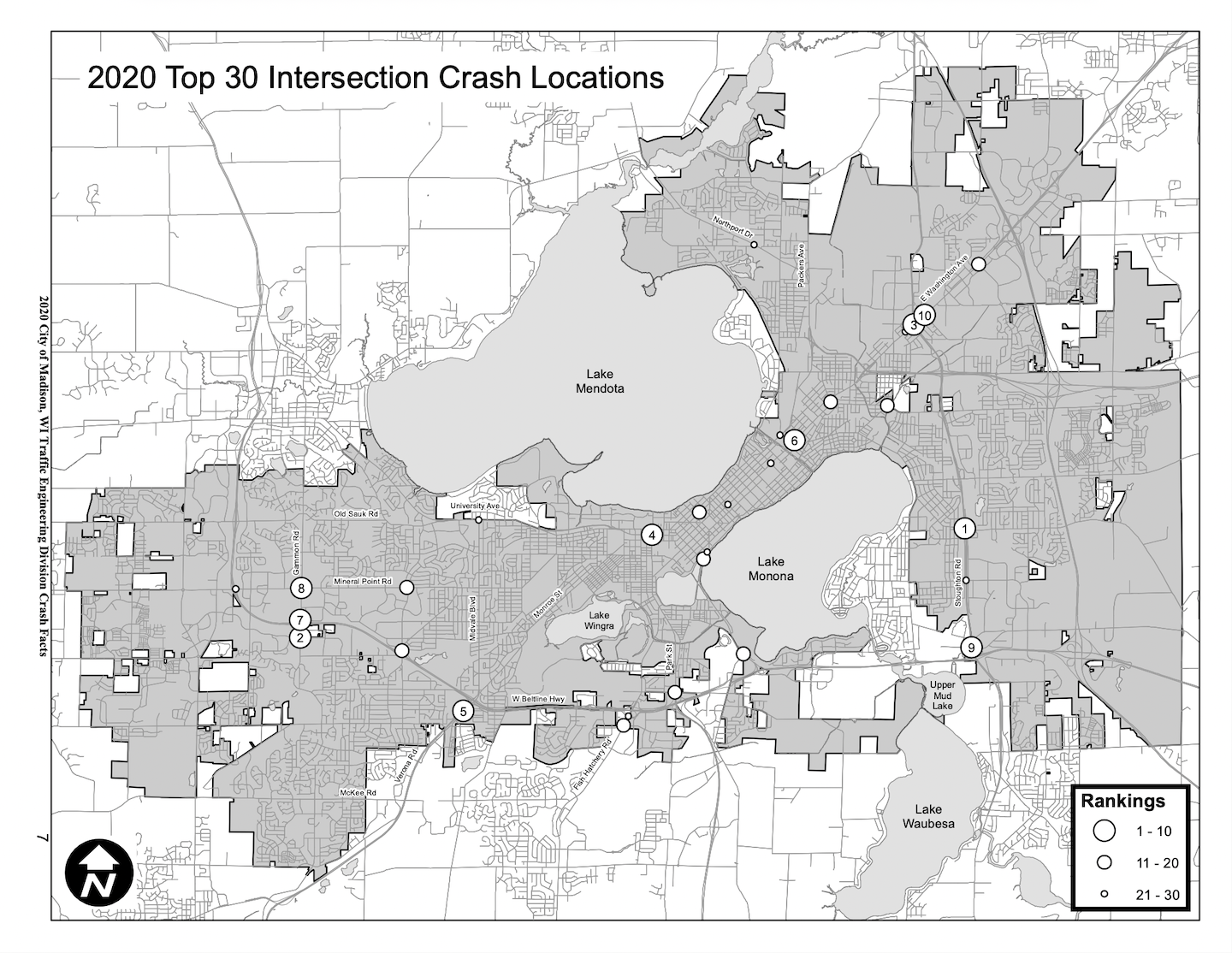 But if you’re looking to find the most dangerous intersection in Madison, that would involve using a  metric over a five-year period called Equivalent Property Damage Only scores – or EPDO scores.

“These were created by Wisconsin Traffic Operations at a safety lab, and also the Madison Area Transportation Board. So the idea of this is that not all crashes are the same, some have a much bigger impact than others. And simply looking at crashes by frequency is not the best idea, so we need some way to account for the severity of the crashes,”  explains city Traffic Engineer Yang Tao.

According to EPDO data, the most dangerous intersection in Madison is actually the intersection of Acewood Boulevard and Cottage Grove Road on the city’s southeast side. Although it has fewer total crashes– 32 – it is the only intersection to have multiple fatalities.

The highest number of car crashes outside of interactions occurred on John Nolan Drive – 6 on the 400 block and another 5  west of the Monona Terrace traffic signal. 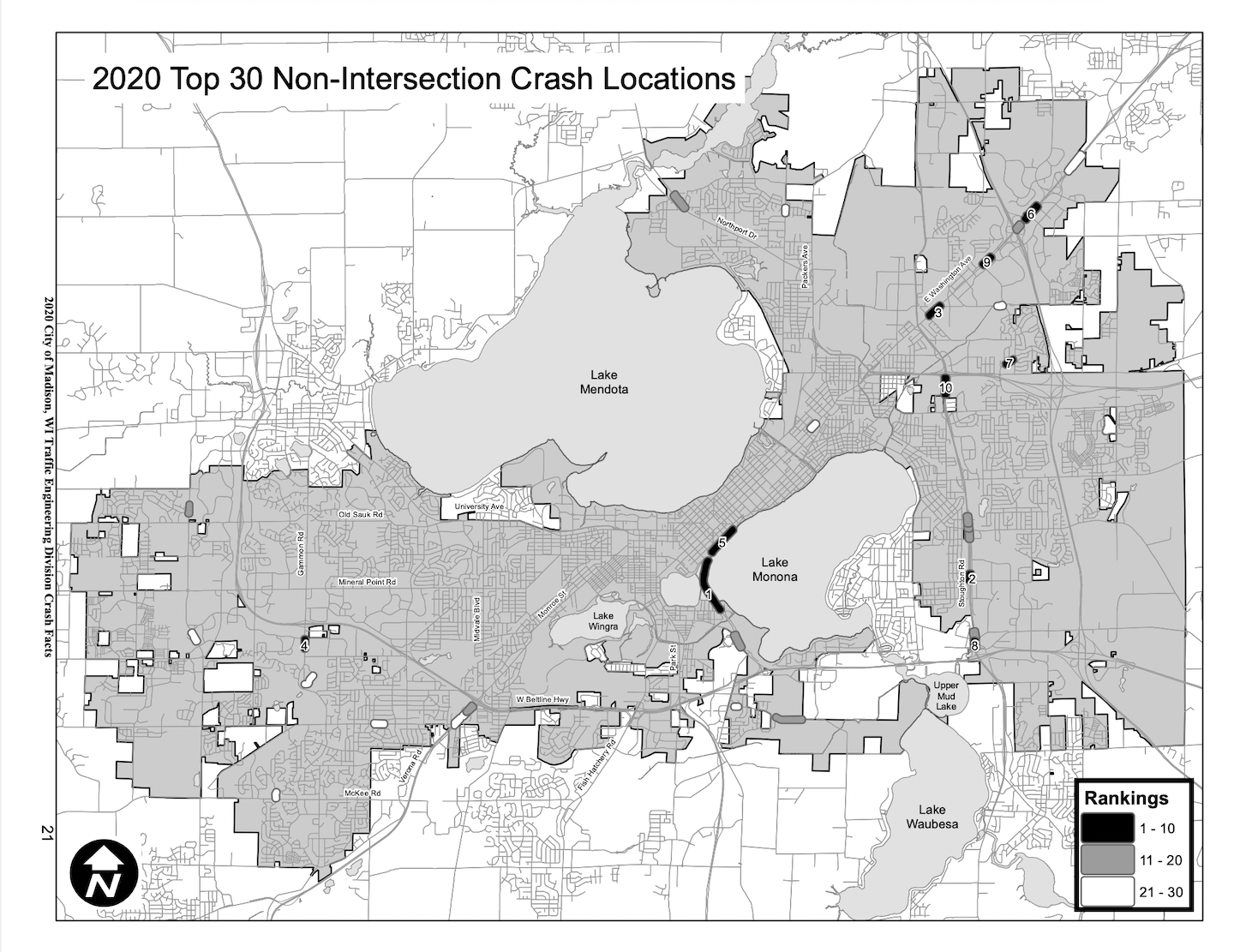 And of course, there are the bike crashes. There were a total of 53 bike crashes in 2020, with 47 of them leading to injuries. None were fatal. Though the bike crashes happened around the entire city, they were mostly concentrated in the downtown area. 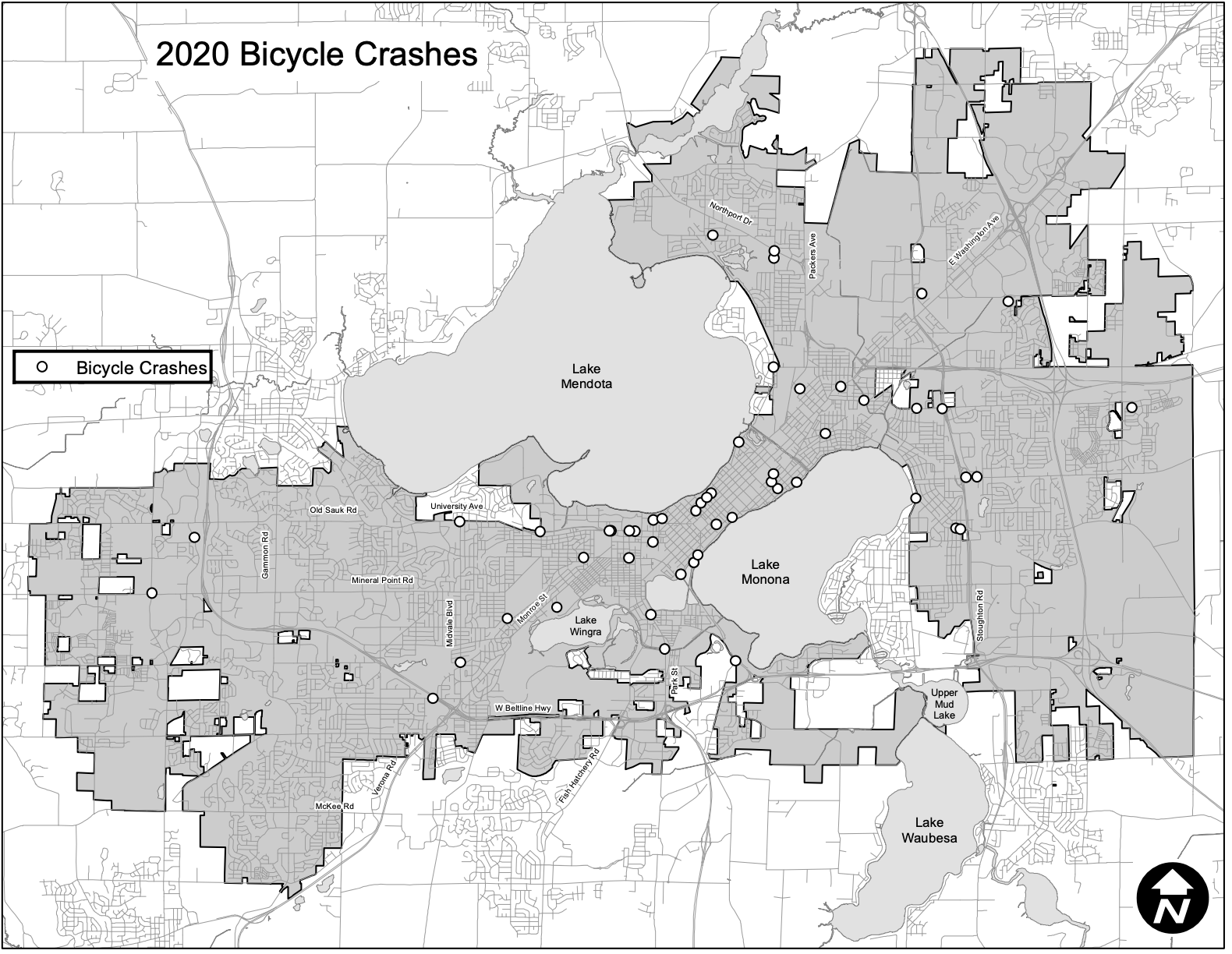 Another 39 crashes involving pedestrians were recorded in 2020, with two fatalities. Most of these crashes were at signalized intersections and were largely clustered around the areas near the UW-Madison campus.

Finally there were five reported moped crashes, with no reported fatalities.

Yang says that all of the data is needed to figure out how to make Vision Zero a reality .

“Mission Zero is really a collaborative and collective effort to be comprehensive. We tackle the problem from all different angles. Only doing that can we achieve our Mission Zero goal,” Tao says.