For the first half of the hour, Hansel talked with Marcia Mitchell, author of “The Spy Who Tried to Stop a War: Katherine Gun and the Secret Plot to Sanction the Iraq Invasion”. This book covered the 2009 leak by Katherine Gun that the NSA and the British Government Communications Headquarters were collecting information on diplomats at the G20 summit in London, in an attempt to win approval of the U.S. invasion of Iraq. Across the rest of the world, media outlets were covered with the headline: “U.S. Dirty Tricks at the Summit” – with the exception of the U.S. media, who did not even cover the story. More background on the Gun case can be found here. The book and Katherine’s story is currently being propositioned as a film in the U.K. 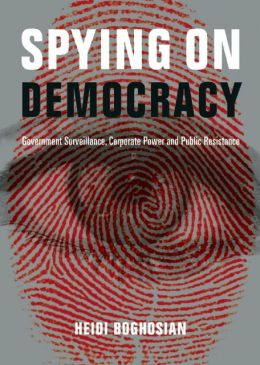 During the second half of the hour the conversation moved to current surveillance within the United States itself, as executive director of the National Lawyer’s Guild Heidi Boghosian joined Tim Hansel to discuss her upcoming book “Spying on Democracy: Government Surveillance, Corporate Power and Public Resistance“. She explained how the data aggregation system works – every time you buy something or give out your personal information, this can be compiled to sell to marketing firms or even the federal government. The federal government can also seize this data at any time without your knowledge. She explained the legal issues in seeking prosecution for the government for this invasion of privacy, because it is very difficult to prove that you are being spied on. She also discussed the negative effects on justice and free communication if we must live under the assumption that every communication is being monitored.