The Access Hour is excited to present a special broadcast of two amazing radio programs from the past.

“Tired of the everyday grind? Ever dream of a life of romantic adventure? Want to get away from it all? We offer you… Escape!”

Escape! first aired on July 7th, 1947 to high critical acclaim. Now it is regarded as one of the best radio programs of the golden age of radio. Writers of the show included Ray Bradbury and its producer-directors, William N. Robson and Norman McDonald also worked on the radio programs Suspense and Gunsmoke, respectively. All were masters of the craft of radio realism.

Escape‘s “Bloodbath” was aired on June 30th, 1950. This episode was written by Academy Award-winning screenwriter James Poe, directed by William N. Robinson, and starred Vincent Price. It’s a story of friendship that is destroyed by greed and unravels into a deadly competition. Mosquitos, bloodsucking carrapato ticks, snakes, vampire bats, and piranhas are some of the dangers the former partners/friends need to survive to make it out of the Andes mountains of Peru.

Lights Out first aired on January 3rd, 1934. This was a landmark series not only for radio but also for the horror genre in general. Plots varied but generally, they were of the crime, fantasy, horror, or supernatural genres. Most episodes played and discussed today are from the Arch Oboler era (1937 – 1947) of the show when a warning was added to the opening.

“This is Arch Oboler bringing you another in our series of stories of the unusual, and once again we caution you. These Lights Out stories are definitely not for the timid soul. So we tell you calmly and very sincerely, if you frighten easily, turn off your radio now”.

In this Lights Out episode “Come to the Bank”, a desperate woman pleads with strangers on the street to come to the bank to help her free the man she loves from inside a marble wall. It first aired on November 17, 1942. 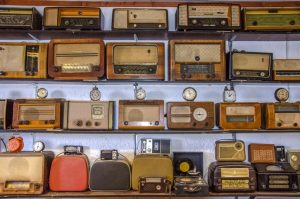