It’s been a little more than six weeks since Madison’s crisis response team hit the road. 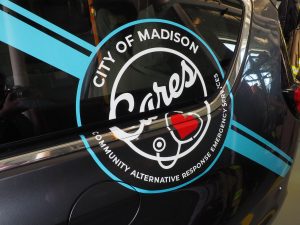 The goal of the program is to replace police officers as the default first responders in non-violent mental health emergencies.

The four-person CARES team works out of a shared office space at the front of the station. They work in relative silence, which is occasionally punctuated by announcements from the overhead speaker.

Compared to the fire department’s rides, the CARES vehicle is non-descript. The only thing that actually distinguishes it as an emergency response vehicle is a small, yellow emergency light on its roof. That, according to Assistant Fire Chief Ché Stedman, was added after the CARES van got ticketed by parking enforcement.

“This is our first iteration,” he says. “The city happened to own this van already, and you can see we put some CARES markings on it. The reason we went with a non-emergency vehicle was because this was feedback we got from the community and other programs. We were told that, you know, having something that looked more authoritative might be a bit more intimidating.”

Stedman admits that there are some drawbacks to the minivan. The light on its roof is used when it’s parked and responding to a call — the vehicle doesn’t give off a siren or alert drivers like a standard emergency response vehicle. That also means that folks aren’t required to pull over for the CARES van.

That can be a problem when navigating through Madison’s difficult traffic, and Stedman says it’s part of the reason the program is currently limited to areas that the team can reach quickly.

“We’re able to carry medical equipment in the van for our medics to use, we’ve got a big bench seat for the patients to sit in, and our providers can sit here,” he explains. “It’s not an ideal situation as far as, in the middle of winter, being able to sit in this van and provide counseling services. But this is the best we can do right now, and it’s working fine so far.”

The current iteration of CARES is a pilot for a larger, citywide program that is tentatively set to roll out in the coming years. City leaders set aside about $600,000 to fund the program through 2021, and are weighing another $600,000 in funding for 2022.

Stedman says that the team has received nearly fifty calls since they launched on September first. According to estimates from the city, pre-2020, Dane County’s 911 center received about 7,000 mental health-related calls per year.

“We’ve gone on a total of 49 calls up to this point,” Stedman says. “We started a little slow, which was understandable. The 911 center was being cautious about being certain the calls they were sending the team on were safe calls. Slowly, over time, we’ve been averaging in the past few weeks about three calls a day, and they spend a little over an hour on each one of these calls typically.”

Paco Bonnin, one of two paramedics on the CARES team, says that the ability to take their time with folks experiencing a mental crisis is crucial — and a departure from how first responders typically handle emergencies.

“Traditionally, an ambulance, especially in a busy area like Madison — they have expediency in the forefront of their response,” he explains. “So they will try to provide that care and transport and then go back in service as quickly as possible so they can be available for the next call. In our model, we’re able to take the time that it takes to get people the outcome that is most favorable. Sometimes, just deescalating somebody can take an hour, just getting them to a place where they’re able to state what their needs are. Sometimes it’s just listening to people, sometimes it’s actually troubleshooting and making contacts with different resources that may come into play.”

According to Mark Norton, CARES’s other paramedic, the team also helps folks connect with long-term resources.

Says Norton: “Basically, we identify patients that either aren’t connected to services or have some additional stuff going on that is acute enough to generate a 911 response, but that usually have a few more chronic issues going on. There are a lot of people out there doing really good work, but everyone is not always connected.”

Norton and Bonnin are one half of the CARES team.

Shequila Galvez, the team’s other counselor, adds that the CARES program can only succeed with the support of the Madison community. Also, she says that if you see the CARES minivan moving through traffic, try to give them a little bit of leeway.

“The longer we’re around, the more recognized we’ll be — and I think so far we’ve had a great reaction from the community,” she adds. “We’ve been able to build a better rapport with community members, who really are our eyes and ears on the streets. I feel very supported by the community already. We always like when people recognize us or say hi.”

Going forward, the CARES program will continue without one of its primary architects — Fire Chief Steve Davis. Davis, who has served the city in various roles for more than thirty years, announced earlier today that he plans to retire this coming spring.

In a press release, Mayor Satya Rhodes-Conway wrote that Chief Davis was a “guiding force” in establishing the crisis response team.

At a press conference announcing the program’s launch in August, Davis said that CARES was inspired by his prior experience as a paramedic.

“This is a very personal day for me,” Davis told reporters. “As a former paramedic, there were always calls that we went on for mental and behavioral health-type emergencies that fell outside of our protocols. We really, throughout the years, have not had another place or alternate resources to deal with people that are having a mental health crisis. Today we start that journey.”

Madison’s crisis response team operates Monday through Friday from 11 AM to 7 PM, responding to calls along the isthmus. There’s no specific number to reach the team at — the decision on whether or not to deploy them is made by 911 emergency dispatchers.

If the team receives a call for a mental health emergency, but is already out on another call, police will be dispatched instead.

All photos by Jonah Chester for WORT-FM