I arrived at the Waukesha County Fairgrounds around 1:30 on Friday, amid sweltering heat wearing a trucker hat, a neutral Hawaiian shirt, and jeans.

Trump came to Wisconsin to vouch for his candidate picks. His list of endorsed candidates include Adam Steen, a candidate running against top Republican Robin Vos. For governor, Trump has endorsed Tim Michels, and for Senate, Derrick Van Orden.

As soon as I had parked my car, I was immediately accosted by anti-Joe Biden memorabilia. The parking lot was filled with people selling tee shirts reading “F*** Joe Biden,” with three extra letters added to the first word.

I began in the merchant area, where tents, truck beds, and RVs were decked out with Trump gear for sale. It was your average fare, mostly shirts and hats with various Trump slogans and conservative talking points, such as a button reading “My Second Amendment is My Gun Permit.”

I joined the line to enter the rally grounds proper. Large speakers surrounded the line, blasting music from every angle. This would become a recurring theme at the rally.

After about 10 minutes in the winding line, I made it to the security checkpoint, run by the secret service and the TSA. It was here that I learned that no outside beverages were allowed in the rally grounds. I chugged the bottle of water I had brought with me, and made my way inside to a large field.

I found a woman wearing a tee shirt that read “My Children are not for Sale,” and struck up a conversation. Unfortunately, the music was very loud, and we were standing right next to a speaker, so my microphone did not pick up the conversation.

She told  me about the alleged human trafficking ring that was being run in Wisconsin, where thousands of children are kidnapped each year to be sold to wealthy pedophiles.

After moving away, I found a young man dressed to the nines like former President Trump. Dressed in a full suit and tie, Alek told me why he was doing what he was doing at the rally.

“-Nate: Why are you out here today?

-Alek: I’m out here to support my President, and I suppose Michels for Governor.

-Nate: That was actually my next question, do you know who you are voting for Governor?

-Alek: Well, I don’t live in Wisconsin, I live in Illinois.

-Nate: I have to ask, is that outfit hot?

-Alek: Yeah, it’s very hot, believe me. I’m dying, only when there’s a slight breeze I get a little bit of peace.” 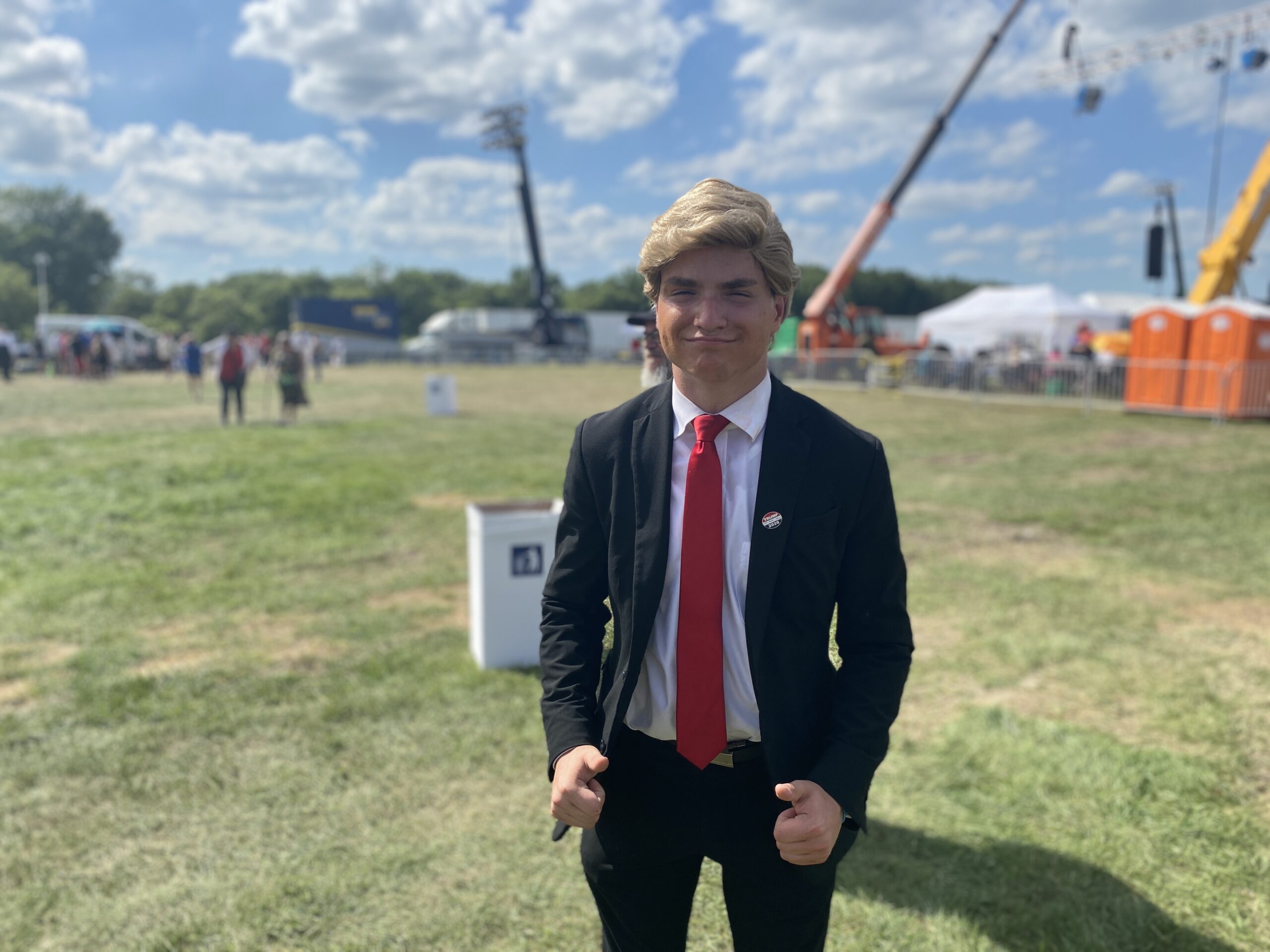 With the temperature now climbing to over 90 degrees, I joined one of the food truck lines to try and get some liquids in me. As I joined the line, a young tween began to vomit about 10 feet away from me. His father soon took him away and gave him some water.

After about 40 minutes in line, word began to spread that this food truck was completely out of any beverages. Having now spent two hours in the heat, I left the rally area for a few minutes to go to a different food truck and find some water.

Finally, it was time for today’s speakers. First up was Michael Gableman, former supreme court justice turned investigator in a wide-ranging, taxpayer funded investigation into the 2020 presidential election. Though Gableman is now facing several lawsuits, he kept to a tight script – leading the rally in an opening prayer, thanking God for Donald Trump.

“There is just one man who is in charge of the wrong that is happening in Madison, and that is my opponent. Here are a few of his credentials: he’s been there for 18 years, 10 of which he’s been the Speaker of the Assembly, he stopped listening to the people long ago, and he wants to keep the Wisconsin Election Commission intact. Worst of all, he continuously obstructs efforts to find out what really happened in 2020” Steen says.

Steen’s 5 minute speech did not give me any information on who Steen is as a candidate. His biggest campaign issue is reshaping Wisconsin’s election laws. But he’s also against all forms of birth control, reports WKOW.

Next was Republican Representative Janel Brandtjen of Menomonee Falls, current chair of the Committee on Campaigns and Elections. Brandtjen spent her 5 minutes pushing unfounded conspiracies about the 2020 presidential election.

“It’s been my privilege to serve you, and as liberty has her box, we know what happened in 2020. We had the indefinitely confines, we had 60,000 to 270,00 people voting in this state without having an ID. The clerks in Madison and in Milwaukee? Nothing happened to them,” Brandtjen says.

Multiple court cases and Trump-funded recounts found no significant fraud in the 2020 presidential election. Officials in the Department of Justice, though, are investigating several recent cases of voting fraud in this primary… from a far-right activist.

“…they are worried because we have a fentanyl problem in America, and a methamphetamine problem here in America. Over 100,000 Americans have died of a fentanyl overdose under Joe Biden’s watch, it’s the leading cause of death for Americans ages 18-45. It just wasn’t like that under President Trump. It was not. I went down to the US-Mexico border and guess what? It’s open. We have an open border now, finishing the wall is a very good idea. Brandon is finishing the wall right now, that’s a surprise,” Van Orden says.

Finally, Republican candidate for Governor Tim Michels took the stage. His speech was almost word-for-word the same speech he gave to GOP voters in Dane County a week before, where Michels declined an interview with WORT. Having already heard Michels give the same  speech, I stepped away for some air.

I had now been at the Waukesha County Fairgrounds for four hours, and Trump wasn’t scheduled to go on for another two. With the lines for a chair growing and growing, I decided to find some space in the shade to sit on the ground and listen to the music, and watch the videos played on the large screens positioned around the stage. They replayed a speech by MyPillow CEO Mike Lindell, which he gave at CPAC a few days earlier, where he downplayed the events of January 6 last year.

“I’d love to come out and show them how much of a charade this is. You all know that the FBI ruled a year ago that there was no collusion with Donald Trump or his backers? It should have been over then, it’s a joke,” Lindell says.

The January 6 Commission in Washington is still investigating the events of the January 6 insurrection, and recently found that Trump was hesitant to condemn the events after the fact, reports Politico.

Pretty soon, it was 7 O’Clock. Then 7:15. Then 7:30. Michels then took the stage once again, not to give a speech, but to let everyone know that Trump was running late, and it would be at least an hour until he landed at the Waukesha County Fairgrounds. Heat stroke was beginning to set in, and I decided to beat the crowd and head home.

The rally was one of the most surreal events I had ever attended, a combination of high spirits and simmering tension. Clothing featured far-right talking points, from Infowars, to Anti-Biden and racist dog-whistle anti-Kamala Harris shirts. I thought I would blend in wearing a neutral Hawaiian shirt, but it turns out I stuck out like a sore thumb. As Moon River played for the second time that day, I left the fairgrounds.