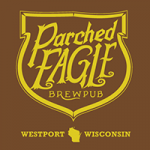 Jim Goronson may have been destined to become a brewmaster.  His parents gave him a Mr. Beer homebrewing kit for his 29th birthday.  He was already a beer connoisseur by then, favoring imports and American examples of what used to be called “microbrews.”  After 13 years of brewing his own batches, Goronson turned pro, encouraged by master brewer Page Buchanan (House of Brews).

In the spring of 2015 Jim launched Parched Eagle Brewpub in Westport, along with business partner Tom Christie, a WORT staffmember and former co-worker.  They’ve established a cozy nest in the Madison area, a growing market for craft beer with its legions of thirsty sophisticates.  Guests can drink either inside the pub or on the Eagle Perch patio.

I posed a few questions to Jim Goronson via email the other day and this is what he told me.

Joe Crawford Mrazek (for WORT):  What is the mission of Parched Eagle Brewpub?

Jim Goronson (for Parched Eagle Brewpub):  The mission of the Parched Eagle is to provide a unique and intimate drinking and dining experience for all customers who step through our doors. Our emphasis is on producing world-class, fresh beers that pair smoothly with our food menu offerings.

Parched Eagle’s goal is to create beers that embody the adventurous spirit of the craft-brewing movement: creativity within the context of the world’s many great beer styles.  Our commitment to producing the best beers possible is the core principle of the business.  Paraphrasing a political cliché from the 1990s: “It’s about the beer, stupid.”

WORT:  What upcoming special events are on tap at Parched Eagle?

Parched Eagle Brewpub:  The biggest special event we have coming up is our First Anniversary party on Saturday May 7th, featuring the debut of La Chingada Caca Maibock, our first anniversary beer (yes, it’s named in honor of longtime WORT program host Tony Castaneda).  The Jon Hoel Trio will be playing that night at 7:30.

WORT:  How do you compete with the many brewpubs and craft brewers in Madison (yet another new one just opened on Park Street last week)?

Parched Eagle Brewpub:  The craft brewing movement is unique because of the spirit of camaraderie and cooperation that exists between breweries.  Is there competition?  Sure but it’s quite friendly and the overarching attitude in the movement is the more the merrier!

WORT:  How does supporting WORT 89.9 FM Community Radio as a business underwriter help you achieve your goals at Parched Eagle Brewpub?

Parched Eagle Brewpub:  Simply put, we love WORT!  As you know I worked there for 8.5 years as Listener Sponsor Development Director and Tom is still the IT Coordinator.  Given our deep connections with the wonderful WORT community, having the Parched Eagle be an underwriter is a proverbial no-brainer.  WORT’s listening audience is a part of our target market.  Add to that the long-standing excellent relationship that WORT has with the Madison Homebrewers & Tasters Guild.  The local craft-brewing scene is also manifested by the No Crap On Tap beer garden at the annual WORT Block Party.

Thanks, Jim.  Come and try Parched Eagle Brewpub’s A Public Affair APA at the WORT Block Party on Sunday, May 22nd.  Toast him and Tom for their support of WORT 89.9 FM Community Radio.