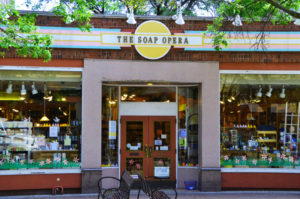 From the day WORT popped some champagne and started broadcasting in 1975, listeners have stopped by the station to contribute money. In the very early days on Winnebago Street, people literally opened our door and threw money into the tiny room when DJs asked for donations.

One of the earliest Madison businesses to support WORT was The Soap Opera, the brainchild of Chuck Beckwith and Chuck Bauer. WORT asked Chuck Bauer about those early years.

The Soap Opera opened on State Street in 1972. What motivated you to start the business?

We were too independent to cut our hair, could not imagine working for anyone else, and were too young to feel any fear. After graduation we sold our handmade crafts on the street. Later we saw a fledgling soap shop in California. That, combined with my growing up in Europe, where tiny perfumeries were common, allowed us to think we might add some personal care products to our crafts. The body care items—all-natural, biodegradable, and herb-based—took off, and the crafts soon faded away.

Many local businesses that opened in Madison in the 70s chose to locate in the many popular malls. What attracted you to State Street?

State Street foot traffic was abundant; we knew traffic would be our oxygen for selling anything in inexpensive units. We also knew State Street building stock permitted very small start-up operations. We never considered any other neighborhood. In fact, in graduate school (M.A., UW, Madison, 1970 Fine Arts) I had done a paper on the sad, disappointing aesthetics of malls.

WORT’s first broadcast was December 1, 1975. When did The Soap Opera first get involved with WORT?

Pretty soon after. We likely sent in a $10 donation, as we frequently did if something came along with which we agreed, though our sales were hardly much more than that on some days.

Folks from WORT’s early days say the station owes a huge debt of gratitude to The Soap Opera. How did you help a struggling community radio station become another community icon?

The primary way we helped was that our store became the pick-up point for the t-shirts and sweatshirts that WORT gave to donors. Over many months, and during several marathons each year, WORT listener-sponsors would stop by with their “ticket” to receive a shirt. We made a lot of friends that way and we saved the tickets to add to our catalog mailing list, which linked your donor base to our customer base, and very likely continues today. Win-win.

Now that you have sold The Soap Opera, you have the time to pursue other passions. What are you working on?

Healthy exercise, timely naps, enjoyment of the arts in Madison, and art—we are both visual artists (www.ctbauer.com). We are also restoring an 82-acre rural New Glarus property to pre-settlement conditions (a fire-dependent ecosystem) as a “Noah’s Ark” for at-risk species of all kinds, hopefully far into the future (www.rareearthfarm.org).

This article originally appears in the September 2017 edition of “Radio Pilot“ newsletter.