On Friday March 15th, host Esty Dinur presented a show with Bad River Chair Mike Wiggins, Ashland Council member Kelly Westlund and journalist Barbara With to discuss the passage of the mining bill and what comes next. 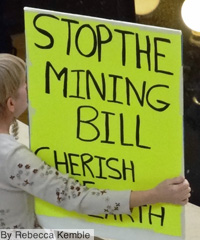 “Bad River Band of Lake Superior Chippewa chairman Mike Wiggins Jr. promised an ‘all-out effort’ to stop an iron ore mine near the tribe’s reservation on Thursday, March 7, 2013, in Madison, Wis. Wiggins and other tribal leaders spoke out against the mine as the state Assembly debated a bill designed to help ease the regulatory process to allow it…

Republicans in the Wisconsin Assembly approved a polarizing mining bill Thursday and sent the measure to Gov. Scott Walker for his signature, completing a long push to help a Florida company open a giant iron mine on the shore of Lake Superior over environmentalists’ objections.” -Duluth News Tribune, March 7th 2013

Read more about the mining bill: