“A [person] only plays when, in the full meaning of the word, (s)he is a [person], and (s)he is only completely a [person] when (s)he plays.”  – Friedrich Schiller, “On the Aesthetic Education of Man”

Pioneering Dutch cultural historian Johan Huizinga argues in Homo ludens (Playing Human, 1938) that play is primary to – indeed it’s a necessary (albeit insufficient) condition for – the generation of culture itself. In other words, playing is the ultimate non-profit, unproductive, yet freedom-inspiring activity human beings engage in.

Huizinga (1872-1945) outspokenly opposed the Nazi killjoys who occupied his country during World War II.  That was not a good time for fun and games in Europe. Things improved after the war, of course, when America went crazy for group-participatory board games.

Hobby gaming, including role-play games, remains a popular way to play in our increasingly digital-electronic age. Madison offers many opportunities to play and thereby generate positive culture, including those offered by one of WORT 89.9 FM Community Radio’s loyal underwriters, Pegasus Games.

Named for the mythical winged steed created by Zeus for his son Hercules to fight Hades, Pegasus Games was created in August 1980 in a converted house off State Street in downtown Madison by three friends.

That store closed in 2002, due mostly to changes in gaming habits among college students, according to Pegasus Games official Boss Lady Lory Aitken.

In 1991, Pegasus opened a store on Madison’s west side (at Market Square Shopping Center on Odana Road). The business has thrived, expanding in order to provide space for players, who throng there evenings and weekends.

I observed a group of six guys playing Champions in the back room at Pegasus Games on an early March Saturday afternoon.  The shop is fun to peruse, with its diverse gaming miniatures (don’t call them “action figures”), marble chess sets and games like Zombicide filling the shelves. 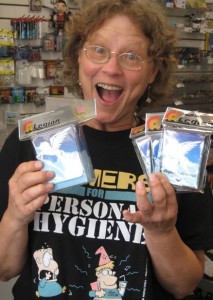 Joe Crawford Mrazek (for WORT): What do you mean by the Pegasus Games motto “Games You Never Outgrow”?

Lory Aitken (for Pegasus Games): Games are not just for children!  Play is good for humans at ALL stages of life.  Science has proven it!  Not only is PLAY of any sort good for stress levels, using our brains is good for staying sharp as we age.

WORT: How do you think tangible (i.e. board & role-play) games will evolve in the future, especially in a culture already cluttered with digital/electronic games?

Pegasus Games: There’s a strident backlash against electronic games, mostly on the parts of parents and grandparents who want to see more of the (grand-)kids than the tops of their heads as they bend over their electronics.  Games are GREAT for socialization, too!  Young professionals also seem to enjoy actually engaging with humans, when they’re not at work dealing with electronics.

WORT: Why does Pegasus Games support WORT 89.9 FM Community Radio, given the fact that you already reach potential customers statewide through your underwriting at Wisconsin Public Radio?

Pegasus Games: We assume that the same folks who enjoy local radio are people who enjoy both using their brains and sharing the company of other human beings.

Pegasus also means “poetic inspiration.”  Get inspired to play more by visiting WORT Underwriter Pegasus Games! Tell them you appreciate their support for WORT while you’re there.