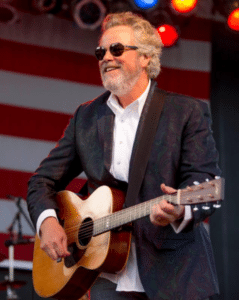 WORT welcomes Robert Earl Keen back to Madison on June 13 with an exclusive interview on Mud Acres, hosted by Tim Britton.

Keen is an American singer-songwriter from Houston, Texas. He was born on January 11, 1956 and has built a phenomenal career in country music that expands to over 3 decades. He’s recorded 18 full-length albums  since his first record, No Kinda Dance, was released in 1984. He has also written for many of your favorite musicians like George Strait, The Dixie Chicks, and Nanci Griffith and in 2012 he was inducted into the Texas Heritage Songwriters Hall of Fame. He resides in Texas with his wife, Kathleen, and their two daughters, Chloe and Clara.

Currently, Robert Earl Keen is on a nationwide tour showcasing his talents from the album Live Dinner Reunion, so be on the lookout because he might be coming to a state near you! On Tuesday, June 13th he will be performing in Madison, Wisconsin at the Barrymore Theatre.