The very first PNM show aired on Oct. 3, 1996. It’s been a long journey from then to now, 20 years, but we’re still on-the-air! We’ve gone through a few transformations over the years, primarily due to the up and down number of our volunteers and their unique outlook to producing shows. But one thing remains constant: presenting a wide range of topics in science in order to inform the general public and that science and technical knowledge are important to daily life and enrich the human existence.

We played clips from three of our past shows: For the show on Dec. 7, 2006, long-time PNM’er Dennis Shaffer interviewed two original volunteers, Kris Wedding Crowell and Kelly Loyet, to celebrate our 10 year anniversary. This clip also had a piece from PNM’s first show. On Dec. 21, 2000, PNM aired a show about climate change with PNM’er Susan Nossal interviewing Rich Bogovich from the Wisconsin Environmental Decade. And finally, PNM’er Holly Simon interviewed UW-Madison microbiologist John Lindquist about bacterial diversity on our Dec. 2, 1999 show.

And we had a Geek-of-the-Week quiz question, something we used to do on every show. Several of our past shows have dealt with the concept of morality, that is distinguishing right from wrong. If a person does something that hurts another person, what one basic, inherent trait or characteristic that most people should have makes that person realize he(or she) did something wrong? Congratulations to DAVE FALLOW for figuring out the correct psychological trait. When someone hurts another person, that someone recognizes that he did something wrong because he FEELS the other person’s hurt or pain. And to do that requires compassion or even empathy. 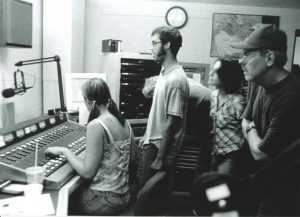 This picture was taken by Linda Wasson in the WORT engineering room during a show. I’m not sure exactly when or the topic of the show. I estimate sometime in 2003 or 2004. Pictured left to right are: Carrie McCurdy sitting at the board, Zeke Unterberg, Morgan Shafer (partially hidden and leaning over), Kate Raiford, and me, Dennis Shaffer in the baseball cap.