It was a dreary, overcast autumn day as Travis Washington stood on a makeshift wooden platform to address a crowd of protesters. Behind him, the capitol building loomed and, below, a group of around one hundred people assembled to hear his story.

Washington is the author of the Hands Up Act, a proposed piece of legislation that would mandate a fifteen year prison sentence for police officers who shoot unarmed civilians.

Washington lives in Illinois, but was invited to speak in Madison by local youth protest group Impact Demand. He’s frequently given talks on the proposed legislation, and wants to bring his case before the U.S. House of Representatives or a United Nations committee.

Both Impact Demand and Washington are looking to enact the Hands Up Act on both the federal and state level. Speaking with WORT last month, Washington said that he’d reached out to one hundred U.S. Senators and, so far, two have responded.

Earlier this year, he began a Change.org petition to gather public support for the Hands Up Act. Washington says most lawmakers haven’t taken the proposal seriously.

Saturday’s event, arranged by Impact Demand, was yet another effort to gather support for the proposed legislation.

Organizer Ayomi Obuseh says the group’s support for the Hands Up Act stems from the shooting of Tony Robinson in 2015. Robinson, while unarmed, was shot and killed by Madison Police Officer Matt Kenny in a home on Williamson Street.

Even after the city of Madison resolved a federal civil rights suit with Robinson’s family for $3.35 million dollars in 2017, Kenny remains a member of the Police Department as a trainer and a mindfulness meditation teacher.

“Madison has not done anything to talk about this problem,” Obuseh says. “Having an act like this will make sure that people know they can’t get away with things anymore, that Black and brown lives aren’t disposable, that we are human, that we are people.”

At the same time as Impact Demand’s event, another group was staging a rally on the other side of the capitol building.

According to a Facebook event page, the event was intended to speak out against the “violence and destruction in Madison, Kenosha, and across the Midwest.”

While the ‘Rally to Take Back Our Communities’ was reportedly a non-partisan event, its hosts included three local Republican candidates for office and the Republican Party of Dane County.

Latoya Greerbay, one of the speakers at Saturday’s event, said the very name of the opposing rally was a hypocrisy.

“How can you have an event called ‘Take Back the Community,’ without inviting the community to the event?” Greerbay said. “It’s time for the community to start standing up and realizing that we have to take back what they think is theirs. It was ours to begin with.” 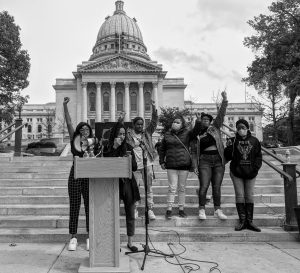 There has been recent movement on Impact Demand’s two other demands– the banning of no-knock warrants and community control over the police.

The City of Madison recently approved the Police Civilian Oversight Board for the Madison Police Department, as well as an accompanying Independent Police Monitor. So far, eleven members of the board have been revealed, and two more will be announced this week.

Nine of the board’s members have been appointed by local reform groups, including fellow protest organizers Freedom, Inc. and Urban Triage.

The law was going to be before Wisconsin’s lawmakers at a special session called by Governor Tony Evers in late August. Hopes for passage of the law were quickly shot down by Republican legislators, however, as they gaveled in and then immediately went into recess.

Instead, a task force established by Republican Assembly Speaker Robin Vos, one of the legislative leaders who punted the special session, will examine Wisconsin’s racial disparities. Proposed legislation from that committee is anticipated this January, reports the Milwaukee Journal Sentinel.

At the beginning of his address to the assembled crowd, Washington stood on a makeshift plywood platform. The box was assembled around the base that once supported the Forward statue, which was torn down by protesters earlier this summer.

In recent months, it has become a frequent pedestal from which protesters share their message.

Written on the front of the box was one name: Breonna Taylor. The police officers who shot and killed her were acquitted of murder by a Kentucky Grand Jury on September 23rd.