Enjoy the July 21 edition of Psychoacoustics, comprised entirely of music by X and Psychedelic Furs, available on-demand through WORT’s website and app until Aug. 4!  Hosts Rev. Velveteen and Bad Sister Heidi’s playlist consists mostly of vinyl records, including tracks from X’s “Live at the Whisky A Go-Go On The Fabulous Sunset Strip” (1988, Rhino/Elektra) courtesy of the late Jamie Cowles by way of The Vampire Cabbie, both great friends and supporters of the station. The show also heavily features songs from X and the Furs’ 2020 albums, both acclaimed by critics and fans as a return to their roots after decades without either of them releasing new material. Tickets are available online or at the door.

Also, be sure to tune in to Psychoacoustics for an exclusive interview with X’s John Doe about his new solo album Fables in a Foreign Land on Thursday, July 28 from 8-11 pm CDT!

What tunes will the bands be playing tonight at the Sylvee?  Read on to find out!! 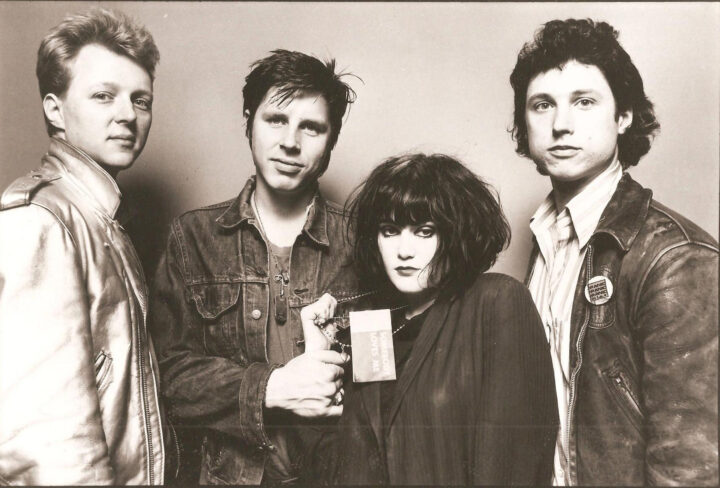 This 2022 tour features the full original band line-up:  Exene Cervenka (vocals); John Doe (bass, vocals); Billy Zoom (guitar) and DJ Bonebrake (drums.) Formed in 1977, X quickly established themselves as one of the best bands in the first wave of LA’s flourishing punk scene and legendary leaders of a punk generation. In 2017 the band celebrated their 40-year anniversary in music with a Grammy Museum exhibit opening, a Proclamation from the City of Los Angeles and being honored at a Los Angeles Dodgers game where Exene threw out the first pitch and John Doe sang the National Anthem.

X‘s setlist changes a bit from night to night. They often start out with a different song and vary the list by 3-4 tracks each show, but always rely heavily on material from Under the Big Black Sun, Alphabetland and Los Angeles. They’ve been including the same 2 cover songs in every show and always end their set by playing “Soul Kitchen“ with no encore.

Breakdown of songs by album: Setlist by The Psychedelic Furs

On the other hand, the Furs‘ set remains pretty much the same every night. They include many crowd favorites, dropping their most well-known song “Pretty In Pink” mid-set. They’ll play half of the 12 tracks on the latest release and 4 more from their classic sophomore album Talk Talk Talk. A single encore consists of 2 songs, one of which – “Heartbreak Beat” – was actually their only Top 40* hit in the U.S. (*Contrary to what one might think, “Pretty In Pink” never did crack the charts in the States but of course, most people know it very well from the John Hughes film named after the song.)

“India” is the first track on Psychedelic Furs’ self-titled debut, introducing a sound they called “beautiful chaos” with the six members competing for musical attention within the song. The record was produced by Steve Lillywhite who was also working with another up-and-coming band, U2, around this time. “India” is the very first song ever composed by Richard Butler when he was just fifteen.

Breakdown of songs by album: