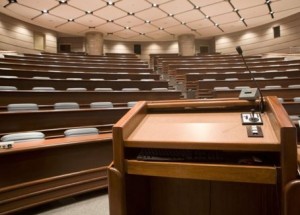 (WORT) — Two days before Christmas, after most students had already left campus for break, a special task force of regents, faculty, and administrators met to hash out the final details of a new tenure policy for the entire University of Wisconsin system.

In a statement, the chair of that task force, Regent Vice President John Behling, said, “The draft tenure policies that will be reviewed by the Board of Regents’ Education Committee next week, and, very likely, by the full board in March, keep the UW System strong—competitive with other universities throughout the nation and accountable to state taxpayers.”

The UW attracted national attention last year after the state budget act removed tenure protections from law and gave the Regents, many of whom are appointed by Governor Scott Walker, the authority to set their own tenure policy. At the time, many voiced concern that academic freedom was under fire from partisan political interests.

The current policy draft reaffirms the importance of tenure to the educational mission of the university and explicitly states that faculty layoff cannot be based on conduct, expressions, or beliefs protected by the principles of academic freedom.

So does this put all those fears about the erosion of tenure in Wisconsin to rest?

Not entirely, says Chad Goldberg, professor of sociology and president of the AFT local union representing faculty and academic staff at UW Madison. Goldberg says “A lot depends on how these rules will be implemented and how they will be exercised.”

Goldberg says a major point of contention for members of AFT-Wisconsin and the local chapter of the American Association of University Professors (AAUP) is a provision expanding the reasons for which tenured faculty can be laid off. These not only include reasons of just cause and institution-threatening financial emergency, but also program discontinuance due to “long-term student and market demand, and societal needs.”

Although some “free-market” critics of tenure say it shields academics from having to change with the times, Rob Howard, chair of Comparative Literature and Folklore at UW-Madison, offers his department as an example of program modification done right. In 2012, faculty in those two programs put forward a plan to merge into a single department for reasons he says made both economic and educational sense.

“We need to give faculty the opportunity to explore, and maybe not change, but to explore opportunities to adapt to the different cultural and technological situation we find ourselves in,” Howard says.

He believes faculty will find ways of adapting with time. But he’s concerned outside pressure to create more efficiency could jeopardize the public investment in the UW in the interim. “If there were outside entities… that believe they can reconfigure programs in ways that are more efficient, without the expert knowledge that those faculty-driven committees have, they could really damage this investment.”

Howard says whatever tenure policy the Board of Regents approve, the uncertainty around tenure has already had an adverse effect on morale locally and the UW’s reputation nationally. “Even if this change [to tenure policy] had no actual effect on any individual’s career, the entire nation is looking at this leading public institution and saying, ‘What is it doing? It’s destroying itself.’”

AFT-Wisconsin is organizing a rally next Friday morning outside the Regents’ meeting to draw attention to their concerns. John Behling expects the tenure policy will come before the full board of regents for a final vote on March 10th.