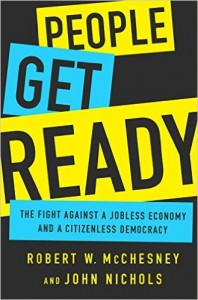 John Nichols and Bob McChesney have written a new book, People Get Ready, and they want WORTians to be the first to hear about it at a special, free event, Friday, February 19, 7 pm, at the downtown Madison Public Library, co-sponsored by the Wisconsin Book Festival.

Nichols and McChesney are household names for WORT listeners. John Nichols often appears as a guest on WORT’s A Public Affair or as a commentator during WORT election coverage. Bob McChesney is both a frequent guest and guesthost of A Public Affair, after hosting the show for several years in the late 1990s. Both are fervent supporters of community radio in general and WORT in particular.

Together they have co-authored five books, including Dollarocracy: How the Money and Media Election Complex is Destroying America; The Death and Life of American Journalism; Tragedy and Farce: How the American Media Sell Wars, Spin Elections, and Destroy Democracy.

On February 19, at the national launch of their latest book, People Get Ready: The Fight Against a Jobless Economy and a Citizenless Democracy, Nichols and McChesney will discuss the dire consequences that technological advancement could affect in our near future: the collapse of employment opportunities across the country as new technologies replace labor.

The benefits of technological progress must serve everyone, Nichols and McChesney urge, rather than enriching the handful of monopolists. Americans cannot let corporate CEOs and billionaire campaign donors define their future.

People Get Ready predicts that the choices made in the next few years will decide not only how technology is used and how economies are organized, but whether democracy will continue to function in any meaningful sense.

This book, by two of America’s leading champions of Net Neutrality and efforts to close the digital divide, details what must be done to move from crisis to hope. Nichols and McChesney argue that the U.S. needs a new economy in which the benefits of revolutionary technologies are shared by everyone, are applied to effectively address environmental and social problems, and are used to rejuvenate and extend democratic institutions and practices.

No sophisticated knowledge is needed to understand the predictions or solutions that Nichols and McChesney offer, just an interest in strengthening our democracy and sharing the benefits of technological advancement among all citizens. The event is free and open to the public. 100% of the event book sales benefit WORT.