Philosophy has been around for centuries, at least as far back as the Greeks like Socrates and Aristotle. Back then, and even today, philosophy is about knowledge and wisdom, trying to understand the reality, nature, all around us. That’s pretty much the same as science. But in the 17th century, science became its own area of reasoning through the use of empirical data to prove theories and concepts. Philosophy became reasoning through the clarification of arguments and logic.

Tonight, the Perpetual Notion Machine welcomes Elliot Sober to the show to discuss the relationship between philosophy and science. Elliot is the William F. Vilas Research Professor in Philosophy at UW-Madison. Elliot discusses several aspects of philosophy with PNM reporter Dennis Shaffer. Among them include the misrepresentation of “survival of the fittest” from Darwin’s natural selection, his own research into evolutionary biology through altruism and egoism, and the field of philosophy OF science. When asked about whether philosophy can teach us things in today’s world, Elliot believes that science is not the only form of legitimate inquiry, “that anything worth knowing is a scientific question. I think philosophical questions are worth thinking about. They’re not scientific questions, but they stand on their own as interesting and important . . .” 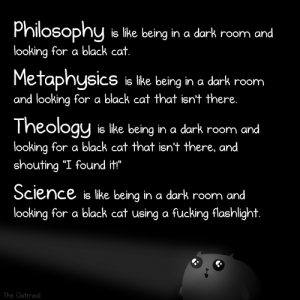 We hope you get a kick from the somewhat humorous definitions of philosophy and science. The image comes from the website differencebetween.net.