Jess Anderson, one of WORT’s original music hosts, passed away at the end of January. Many long-time DJs fondly remember Jess for his musical knowledge, activism and sparkling personality. Some of our current volunteers wrote about Jess’ participation at the station. 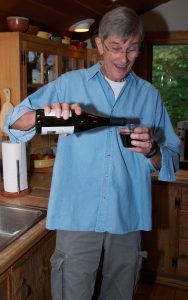 “I remember Jess Anderson and his wonderful show Classical Omelet. Saw him many times at UW faculty piano concerts over the years, where he always said hello. He was brilliant and funny, with an encyclopedic knowledge of classical music and exquisite taste. In another era I can imagine him having a salon for musical luminaries and the wickedly funny where everyone played and dished to their hearts’ content.

Jess had several radio programs over the years. His Classical Omelet was the show that Musica Antiqua eventually replaced. (My show was two hours of early music where Hmong Radio is now.) Jess was a fun and a generous colleague who was always good for a second opinion on pronunciation or an artist’s performance. His shows were beautiful, interesting, and delivered with authority, ease, and charm. I will miss him.”

Bonnie Kalmbach, host of WORT’s Two for the Blues:

“This is sad news. Jess was very active at WORT as a programmer, was also active on committees and I am pretty sure he served on the Board of Directors. I remember him as quite tall, slim, very nice and witty. Which is not to say we didn’t have our disagreements on how the station should be run, but he was such a charming guy, you always liked him.

I always listened to his Sunday morning classical show- he played LOTS of harpsichord music. He also wrote excellent concert reviews for the ISTHMUS.

He once confided in a few of us at a committee meeting that he had reached the “unforgivable age of 50”. Well, he didn’t look his age but as I knew he was older than a number of us at the station, I have found myself wondering about him in recent years.

Here is an impressive tribute to him I found online – he was a true Renaissance guy.”

“I am very saddened to hear that Jess has passed away. I used to look forward to waking up Sunday mornings to hear his show on WORT, where I fell in love with the harpsichord and the music of Scarlatti. A few years ago he invited me to his home, where he showed me the beautiful harpsichord that had been made for him years before. He described every detail of the instrument, which was a work of art. He graciously allowed me to try it out and I played some Bach. Yes, I felt intimidated playing Bach in front of the master, so I quickly switched to some improvisation hoping to throw him off. I don’t think it mattered, at least that’s what I tell myself, because he loved listening to music. He had heard me play at the Cardinal bar, so he took the opportunity while I was at his harpsichord to tell me, or probably to reassure me, that I was the “real deal.” Of course, I asked him to play, and he did. I was honored and awestruck. Jess had a passion for music that he has shared for many years, whether it was on the radio or performing music himself so eloquently. Every time I hear harpsichord music, I’ll still think of Jess. He told me had perfect pianist’s hands, which he did. He also had the heart of a true musical artist. He was the real deal.”

John and Rose Mary Harbison with the board & staff of Token Creek Festival:

“All of us at the Token Creek Chamber Music Festival are very saddened at the death of our longtime friend and board member Jess Anderson on Sunday, January 24th.
Jess was a crucial part of our festival, a constant voice for quality, idealism, and clarity of purpose.

He was a knowledgeable musician, a pianist who enlivened our meetings with impromptu renderings on the Steinway—perhaps some Schubert or some Bach—who reacted strongly, emotionally to elements of our program.   Musical citizens like Jess Anderson are the lifeblood of a city’s musical life. Jess’  fine judgment and deeply felt love of music helped make the Token Creek Festival the kind of Schubertian community it has always aspired to be.   We will miss him.”