On Monday March 11th, host John Quinlan interviewed author and psychotherapist Chana Wilson. In “Riding Fury Home: A Memoir,”  Wilson chronicles the destructive influence of so-called “reparative therapy” on her family in the 1950s and 60s, what was, in effect, an attempt to use the mental health system to “fix” her lesbian mom and normalize her. She raises these issues at a time when the California legislature has just passed a law that prohibits this kind of coercive therapy for minors, a law now being challenged in court by social conservatives. 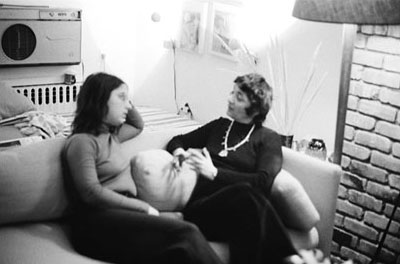 Her powerful memoir is much more than this, however. It’s also an inspiring tale of redemption and rediscovery that includes both her mom’s and Chana’s own life-affirming coming out stories, in the context of the supportive community then coalescing around the feminist and LGBT rights movements. Forced into being a caretaker for her depressed, suicidal mother as a young child might have led her to reject and distance herself from her mother. Instead, as Chana entered adulthood ion the cusp of the 1970s, she was given the gift of discovering the reasons behind her mother’s illness and the nature of her abuse at the hands of a the mental health establishment, allowing her to meet the talented, intelligent, supportive mother who had always been there beneath the surface. As newly-out lesbians, they embarked on a remarkable journey of discovery together about the meaning of relationship, as their own relationship transformed again and again. She also shares compassionately the plight of a distant father, forced to accept a passionless marriage because that’s what had been expected of him, who eventually grows to be accountable for his abandonment of his daughter, and in his understanding that his wife’s oppression had also been his own. Coming out and being who you are: a story told in multiple dimensions in this fascinating conversation with Chana Wilson.

Chana Wilson, whose career focused on radio for much of the 1970s, also shares excerpts on our show from an interview she conducted with her mother in 1974 on WORT sister community radio station KPFA in Berkeley. For more excerpts from this interview, other background on the book, and photos of the author and her mother, please go to http://www.ridingfuryhomebook.com .