If anyone embodies the spirit of community radio, it’s Rockin’ John. For over 43 years, he has continuously hosted a show on WORT ever since the first night the station went on the air in December, 1975 — the only current WORT host to do so. 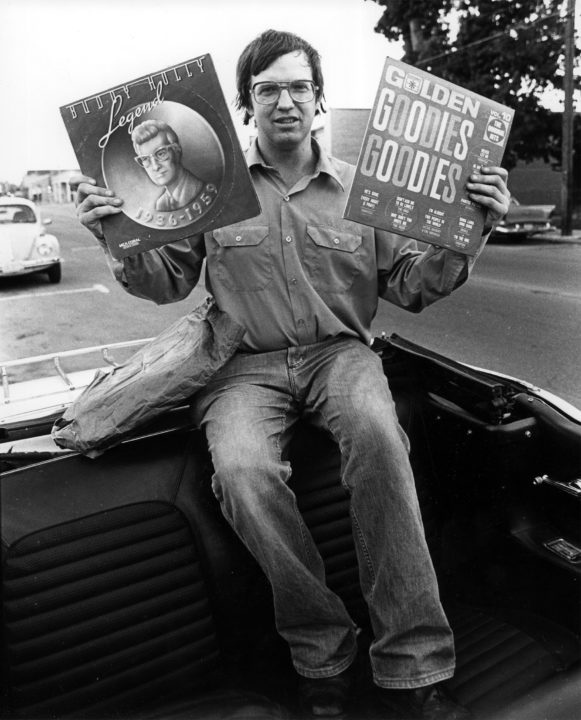 John’s distinctive voice and comprehensive knowledge of ’50s and ’60s rock have made him one of the most popular radio hosts in South Central Wisconsin.

As he tells it:
“I was born in St. Louis, Missouri and our family moved to Brooklyn when I was a really small kid.
I was in the right place at the the right time in the 1950’s. Rock’n’Roll was all over the place in NYC in the early and mid ’50’s.”

John began building his record collection with his purchase of the 45 of Bill Haley & the Comets “Shake, Rattle & Roll.” He was nine years old.
He moved to Madison, WI in 1957, already infected by the rock ‘n roll bug:

“Alan Freed is a huge reason I grew up to be a disc jockey. He was playing rhythm & blues and doo
wop. I’d never heard that music before and he started playing it in New York (in 1954) and I just
loved that stuff.”

John sums up his program as “mostly records from the ’50s and ’60s and what fits from the ’70s up to today.” His self-described “mixed bag” shows feature a “Missing Link” to honor the memory of electric guitar pioneer Fred Lincoln ‘Link’ Wray, Jr. and he also plays “two Beatles or Beatles-related songs” to honor the late John Lennon and George Harrison. I Like it Like That also has many annual specials throughout the year, including two hours of Elvis Presley on the King’s birthday; a “Day the Music Died” show featuring Buddy Holly, Richie Valens and the Big Bopper; a “School’s Out” show with songs about surfing and cars and summer; a doo-wop special, and many others. And when rock legends pass away, John plays their music and gives the listeners a lesson on who we lost and where they fit in the rock and roll spectrum.

But I Like it Like That is not just an oldies show.
John features the music he grew up listening to (often from the actual records he bought as a pre-teen and teenager!) but he also plays and promotes modern artists such as Darrel Higham, Imelda May and Los Straitjackets, whose music embodies a similar vintage rocking spirit.  While the show features many songs that were chart hits back in the day, he also spins plenty of deep cuts and songs that “should have been hits.” And John is a tireless supporter of local music! You might catch him at a live show rocking out to the The Cash Box Kings or cheering on his old pals The Rousers.

Tune it to I Like it Like That every Saturday from 6-8 PM and hear what has made this show unique over 43 years.
As John says: “If it wasn’t for WORT I’d just be sitting in my living room spinning records for myself.”