WORT celebrates World Radio Day (Feb. 13th) with a live remote broadcast of I Like It Like That! Join us Saturday from 6:00 to 8:00 p.m. at Next Door Brewing Company, located at 2439 Atwood Avenue on Madison’s east side for an in-person edition of Rockin’ John McDonald’s oldies show. Admission is free and all ages are welcome to the brewpub, which  has a full food menu as well.

It’s also a benefit for WORT 89.9 FM Community Radio. Next Door Brewing will donate $1 from each pint sale of its “Broadcast Blonde” Ale as well as each featured wine to your favorite local media resource. WORT, of course, is also available worldwide at www.wortfm.org.

I spoke with Rockin’ John on Monday, just after his return from Clear Lake (Iowa), where he makes an annual pilgrimage to the memory of Buddy Holly, Richie Valens & the Big Bopper. That trio of rock ‘n’ roll legends famously died there early in the morning of February 3, 1959, when their doomed tour’s Beechcraft Bonanza crashed into a field en route to the next gig in Moorehead, Minnesota. 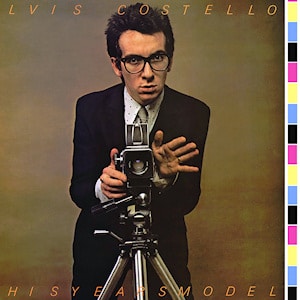 This year Rockin’ John met Elvis Costello in the lobby of the Best Western Holiday Lodge.  Or, rather, he met a dapper impostor with a film crew.

Richie Valens’s sister was talking to ersatz Elvis.  The real Elvis Costello, lucky husband of pianist/vocalist Diana Krall, recently published a witty, detailed memoir: Unfaithful Music & Disappearing Ink (NY: Blue Rider Press, 2015). In that tome he discusses a visit to Madison in the winter of 1979, during which he walked past the Quisling Clinic, marking its provocative name for use in a future song lyric.

rf Ballroom holds 2,100 music fans in a town of just 7,777 (2010 census). This venue is on the National Register of Historic Places and is listed as an historic landmark by the Rock & Roll Hall of Fame & Museum. It has hosted a weekend of Winter Dance Party tribute concerts since February 1979. Rockin’ John has attended every one. “It’s like a family reunion,” he explains.

As for what special discs he plans to spin at Next Door Brewing Co. on Saturday night, Rockin’ John mentioned Minneapolis rockabilly hipsters Holy Rockarollaz, something by 84-year-old guitarist Tommy Allsup (a Buddy Holly recording collaborator) and other goodies he picked up in Iowa.

At the 2016 Winter Dance Party Rockin’ John also got to see 78-year-old rockabilly icon Wanda Jackson perform, albeit seated and struggling to sing due to poor health this year.

World Radio Day is being celebrated by community radio stations across the globe. Get in on the fun here in Madison by attending this rare WORT benefit live remote on Saturday at 6:00 p.m. at Next Door Brewing Co. They also offer a mouth-watering menu of food.

Rockin’ John has hosted I Like It Like That since he created the show in 1975. He looks forward to seeing many WORT listeners & friends at Next Door Brewing Co. To paraphrase John’s tagline: WORT will appreciate it and you’ll feel good about it!