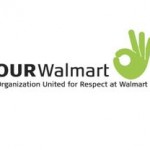 On Wednesday, November 21, guest host Liz DiNovella speaks with independent journalist Sarah Jaffe. She is covering the story of a group of Walmart workers who are planning to stage a walkout on Black Friday. The workers planning to walk out are members of a union-backed organization called Organization United for Respect at Walmart, or OUR Walmart, and will hold strikes and rallies along with their allies this Friday. Sarah says, “this is some of the most exciting labor organization I’ve seen in my career…the workers are fighting back. And it’s a few workers at each store, it’s not an entire store walking out. They’re not fighting for union representation; they’re fighting for respect on the job.”

There will be a variety of actions this Black Friday, including walk-outs by some workers, picket lines, and prayer vigils. Walmart has filed a National Labor Relations Board complaint accusing the United Food and Commercial Workers Union of un-lawfully organizing picket lines and in store flash mobs. Sarah explains “they’re not fighting to form a union, which is Walmart’s claim. [Our Walmart] is deliberately run very differently from the labor unions we’re used to seeing.”

One of the largest complains the workers have is the issue of under-staffing at both the retail stores and warehouse, and the fact that workers don’t always know how many hours they will be working per week, posing a problem for part-time workers. “Walmart has driven down wages for workers in this country, when the service sector is paying poverty wages. The end game is nobody can even afford to shop at Walmart.”