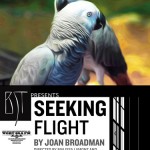 Seeking Flight is a play about two African Gray Parrots: one born in captivity and the other born in the wild. Both are stuck in a laboratory where they are subjected to a series of experiments that “test their ability to speak English and form concepts.” The play is based on several experiments that actually occurred from the 70s through the 90s that tested parrot language development. The play explores the topic of parrot intelligence. Says Levine Thal “The thesis of the play is that even in the best of circumstances, why keep parrots in captivity? There is a lot of controversy in the bird lovers’ world over this issue of doing all this language research, because what does that tell us? That parrots are smart. So what is important about this scientifically? So there’s a lot of controversy about this.”

The play, which Levine Thal describes as family friendly, will open at the Broom Street Theater on Oct 19 and run through Nov 10 every Thursday, Friday and Saturday at 8 PM.