(WORT) Over the last few years, awareness about the national problem of sexual assault on college campuses has been growing. According to the Wisconsin Coalition Against Sexual Assault, one in five women are sexually assaulted during college, and at least 65% of sexual assaults go unreported in general.

In response to these alarming statistics, some lawmakers are trying to come up with politically viable policy solutions. 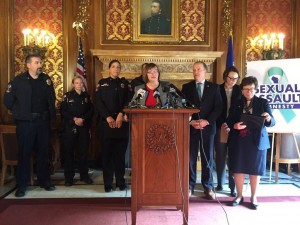 In a news conference Monday morning, State Representative Joan Ballweg (R-Markesan) announced a new bill that she hopes will remove a “possible barrier” to reporting sexual assaults on and off campus. The “Sexual Assault Amnesty Bill” would prevent law enforcement from ticketing victims of sexual assault for underage drinking.

Ballweg says, “It would not only protect the victim of sexual assault, but also a bystander. Law enforcement tells you this is the usual situation, where a friend accompanies someone to talk to law enforcement or to seek medical assistance.”

In the state of Wisconsin, the penalty for underage drinking can include up to a $500 fine and community service for a first offense.

Ballweg’s proposal garnered a range of official endorsements. In a statement, Attorney General Brad Schimel praised the “common sense bill” and thanked Ballweg for making the issue a legislative priority this session.

The Chancellor and Assistant Police Chief at the University of Wisconsin-Madison also joined Ballweg at the news conference to express their support. Since 2014, UW Madison has been the subject of multiple federal investigations for its handling of campus sexual assault cases.

As a matter of policy, UW Madison does not currently cite people reporting sexual assaults for underage drinking. According to Assistant Police Chief Kari Sasso, it has not done so for years.

No one could say how much of a factor the fear of being cited for underage drinking might be in some victims’ decisions not to report sexual assault. But Kelly Moe Litke of the statewide Wisconsin Coalition Against Sexual Assault supports the bill on the grounds that it helps focus attention “on the behavior of the perpetrator, rather than [the behavior] of the victim.”

“I don’t have any specific stories where I know of survivors that have been cited,” she says. However, she thinks the bill is “a way to communicate to survivors and the community that we support survivors and we don’t blame them for the assault.”

Erin Thornley-Parisi, Executive Director of the Madison Rape Crisis Center, says the bill could have a positive impact by enshrining progressive policies in place on some campuses into law statewide.

But ultimately she says a robust mix of policy, education, and victim services will be needed to address the sexual assault epidemic. “Education is key,” she says. “In the past, we’ve focused so much attention around teaching women how not to get raped. And we’re redirecting that now so that men know not to rape.”

Although similar legislation had been introduced in previous sessions, Representative Ballweg says she’s confident that, with the support of Republican legislators, law enforcement, and advocacy groups, the “Sexual Assault Amnesty bill” will pass this time around.