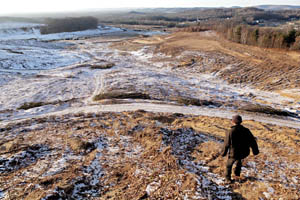 On the website for his film, Jim Tittle describes his project: “We’re making a documentary about the frac sand mining boom in Minnesota and Wisconsin. Due to a rapid increase in demand, pure silica sand has become a valuable commodity, and mines are opening here at a rapid rate. The silica used in hydraulic fracturing (aka : “fracking”), has other uses– glass manufacturing and toothpaste, for instance — and a few established mines have been in operation here for decades. But now, new companies have arrived, and land with accessible silica deposits is selling for high prices. In addition to a bonanza for a few lucky landowners, the new mines promise jobs and economic stimulus for the small towns and rural areas nearby. A year ago, an oil company bought a tract of land in near my mother’s house, in rural Goodhue County, Minnesota. The prospect of an open pit mine led to the formation of an opposition group, a series of public meetings, and a temporary county moratorium on frac sand mining… Good people are on both sides of the issue, and sometimes the facts aren’t obvious.  “The Price of Sand” will be a candid documentary about what the frac sand industry is doing in this region.  We’ll talk to local people and we’ll also dig for information, interviewing experts and officials.”

Learn more about “The Price of Sand:”