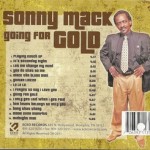 On Wednesday October 31, our host Peaches Lacey speaks with musician and recording artist, Sonny Mack. He grew up surrounded by music, first introduced to music through his parents, and began his career professionally playing with Bobby Rush. He grew up in Chicago, but has moved back and forth between the city and Memphis, where he currently resides. He has recently released a CD under the Ecko Records label. He describes the famous Beale Street in Memphis, Tennessee, where he plays with his band, “The United States is a melting pot of people from all different cultures and countries…on Beale Street, you can see people from everywhere…every city in the US, and other countries…people come from Scandinavia, Japan, England, everywhere. My band plays on Beale Street five days a week and we see people from everywhere. It’s a really great experience. My band doesn’t get paid for playing, they play for tips and then get a percentage off the bar…but that goes to show you how much my guys enjoy doing what they’re doing, playing R&B, soul, and the blues…”

He speaks about the process of creating music, “the first thing, when I write, I write about life situations…things that happen to me, that I’ve seen, or that I know have happened to other people. Ideas first, and when I get the idea, I can hear all of the music and everything in my head. You get a good hook, that’s where the idea is, and you develop your song from the hook. You get your idea, then your hook, and then you tell the story.” After he develops the verses and the song, he takes it to his record company and collaborates with them until he has developed a full song. It is a process that needs to be continually worked on and added upon until the work is complete.

Sonny speak about some of his songs, including “Clean Up Man” and “Body Drain,” as well as Ecko Records and his strong relationship with the label. Says Sonny, “there’s a magazine in Scandinavia, and I’m on the cover of the magazine. And this came from my relationship with Ecko Records. They came to Memphis, visited me, they came to Church with me, and they did a photo spread and everything. They remembered me when I was in Germany playing…a long time ago. So they did a follow up…they found out I was with Ecko Records and they came to Memphis.” He plans to tour in Scandinavia, England and Germany, “all of this comes with my affiliation with Ecko Records.”