Tonight, the Perpetual Notion Machine examines the many intricacies of spoken accents, that is, how people speak and pronounce words and phrases in different parts of the country, but we mostly focus on the Midwest and Wisconsin. Our guest is Joe Salmons, a professor in language sciences at UW-Madison and Director of the Center for the Study of Upper Midwestern Cultures. Joe tells PNM’er Dennis Shaffer that how different accents originated in different parts of the country can be complicated. But generally, as our ancestors immigrated to America from their native land, people continued their native speaking patterns as they learned English. But, in the Midwest, people came not only from foreign lands, but from Eastern and Southern regions of the U.S. This hodgepodge created a melting pot of all sort of accents. For instance, “cot” became how you say “caught”. Then there’s “dat” for “that” and “dere” for “there”. Another that seems a Wisconsin original is “ag” or “eg”.

The center that Joe is director has many areas of study, including the Wisconsin Englishes Project.
Also, the website Babbel has a very good webpage on the accents of Midwestern American English. 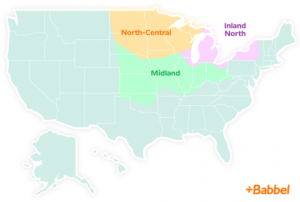