Today’s special session, called on by Governor Tony Evers to address the state’s 173-year-old abortion ban, lasted all of around 14 seconds. Senate President Chris Kapenga, the Republican Senator from Delafield, approached the bench in front of just a small handful of Senators, mostly Democrats, before once again gaveling the special session in, and right back out.

Wisconsin’s current law on abortion, written in 1849, would ban all abortions unless the mother’s life is in danger. It applies to cases of rape and incest.  Last month, Republican Assembly Speaker Robin Vos said that he would like to see exceptions for rape and incest in Wisconsin law, according to the Milwaukee Journal Sentinel. This was never brought up during today’s session.

After today’s short session, state Democrats came out of the woodwork to criticize the lack of any action.

Senator Bewley began by slamming the Republicans for their inaction.

“In March, knowing that a majority of Wisconsintes support access safe and legal abortion, Republicans adjourned the regular legislative session without giving legislation any consideration or debate. This is why today’s special session is so important,” Bewley says. 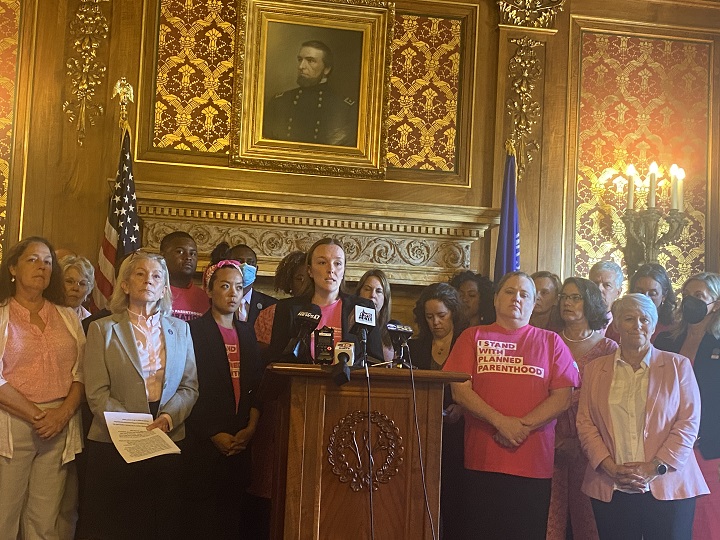 Representative Neubauer then took the podium to talk of her family’s history supporting abortion access, as Neubauer’s grandmother taught sexual education and her mother volunteered at abortion clinics.

“If the US Supreme Court strikes down Roe v Wade, it will be a brazen political act, carried out by a blatantly partisan court, corrupted by appointments from a disgraced former President,” Neubauer says.

Dr. Eliza Bennett is a family planning provider, and an OBGYN who performs abortions. Dr. Bennett says she’s  worried for her and her patients’ future.

“Currently, in Wisconsin, my patients face many hurdles to practice their autonomy. However, despite financial, logistical, and bureaucratic barriers, my patients are still able to access abortion care here in Wisconsin. If this law, from 173 years ago, comes back into effect, when women had no real rights, no agency or autonomy, they will be taken back to that time. They will lose their autonomy. I will lose my ability to morally and ethically care for my patients, or if I continue my practice, I will face criminal charges and jail time,” Dr. Bennett says.

Democrats did not just speak up at the press conference today. In a press release today, Governor Tony Evers characterized GOP inaction by saying they failed to muster courage to perform a simple duty.

Democratic Senator Melissa Agard of Madison was in the Senate Chambers today, and witnessed the 14 second session firsthand.

“Unfortunately, I was not surprised, but I will say I was disappointed in the fact that my Republican colleagues are force feeding their personal ideologies onto the majority of people in the state of Wisconsin,” Agard says.

But it’s not just state lawmakers making their voices heard.

Last night, the Madison Common Council passed a resolution officially opposing the presumed Supreme Court decision, as well as Wisconsin’s abortion ban. The resolution also states that it supports the Madison Police Department in not physically arresting anyone who provides an abortion.