On Friday March 8th, Esty Dinur hosted a split show featuring two authors. During the first half of the program she spoke with Cecile Pineda about her book, “Devil’s Tango: How I Learned the Fukushima Step by Step.” Pineda is the author of several novels, including “Face, Fishlight: A Dream of Childhood,” and “Love Queen of the Amazon.” She is the recipient of the Californian Commonwealth Club’s Gold Medal, the Sue Kaufman Prize, and a National Book Award nomination. She lives in Berkeley, California. During the second half of the program Esty spoke with George Ciccariello-Maher about his book, “We Created Chávez” about the life and legacy of Hugo Chavez. Ciccariello-Maher is Assistant Professor of Political Science at Drexel University.

“Devil’s Tango: How I Learned the Fukushima Step by Step”

“As much personal journal as investigative journalism, this account traces the worsening developments at Fukushima Daiichi during the first year following the nuclear disaster. Often poetic in tone and philosophic in scope, this day-to-day reportage is peppered with the author’s reflections and dramatic monologues as she investigates the public’s willing blindness toward the nuclear power industry’s disregard for public safety in the pursuit of profit. The book offers a unique perspective and attempts to come to terms with Fukushima’s catastrophic consequences on the planet.” 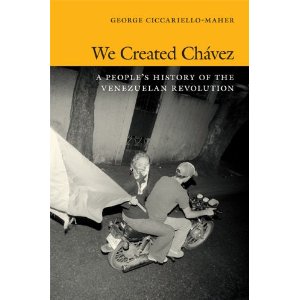 We Created Chavez: A People’s History of the Venezuelan Revolution

“Since being elected president in 1998, Hugo Chávez has become the face of contemporary Venezuela and, more broadly, anticapitalist revolution. George Ciccariello-Maher contends that this focus on Chávez has obscured the inner dynamics and historical development of the country’s Bolivarian Revolution. In We Created Chávez, by examining social movements and revolutionary groups active before and during the Chávez era, Ciccariello-Maher provides a broader, more nuanced account of Chávez’s rise to power and the years of activism that preceded it. Based on interviews with grassroots organizers, former guerrillas, members of neighborhood militias, and government officials, Ciccariello-Maher presents a new history of Venezuelan political activism, one told from below. Led by leftist guerrillas, women, Afro-Venezuelans, indigenous people, and students, the social movements he discusses have been struggling against corruption and repression since 1958. Ciccariello-Maher pays particular attention to the dynamic interplay between the Chávez government, revolutionary social movements, and the Venezuelan people, recasting the Bolivarian Revolution as a long-term and multifaceted process of political transformation.”

Read more about “Devil’s Tango: How I Learned the Fukushima Step by Step:”

Read more about “We Created Chavez:”