On Friday March 29th, host Esty Dinur presented listeners with a split show. For the first half of the hour she interviewed Jacqui Dunne and Bernard Lietaer about their book, “Rethinking Money: How New Currencies Turn Scarcity into Prosperity.” Jacqui Dunne is an award-winning journalist, global business leader, and founder/CEO of a US-based enterprise that assists entrepreneurs in the development of technologies that restore the earth’s equilibrium. Bernard Lietaer is a world-renowned expert in the field of currencies and financial systems, and co-designer of the precursor to the EURO. During the second half of the program Esty Dinur interviewed members of the Truth Tour of Lakota Grandmothers. 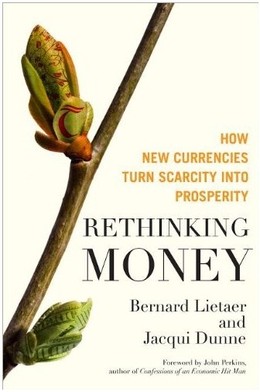 “As the United States struggles and the economies of Europe stagger, we fail to see a way out of this agonizing cycle of repeated financial meltdowns. In fact, there are thousands of ways to solve not only our recurring fiscal crises but our ongoing social and ecological debacles as well. Solutions are already in place where terrible problems once existed. The changes came about not through increased conventional taxation, enlightened self-interest, or government programs but by people simply rethinking the concept of money. With this restructuring, everything changes. In this visionary book, Bernard Lietaer and Jacqui Dunne explore the origins of our current monetary system—built on bank debt and scarcity—revealing the surprising and sometimes shocking ways its unconscious limitations give rise to so many serious problems. But there is hope. The authors present stories of ordinary people and their communities using new money, working in cooperation with national currencies, to strengthen local economies, create work, beautify cities, and provide education—and so much more is possible. These real-world examples are just the tip of the iceberg—over 4,000 cooperative currencies are already in existence. The book provides remedies for challenges faced by governments, businesses, nonprofits, local communities, and even banks. It demystifies a complex and critically important topic and will strike a deep chord with readers eager to find innovative, meaningful solutions that will do far more than restore prosperity—it will provide the framework for an era of sustainable abundance.”

Read more about the book: http://rethinkingmoneythebook.com/

According to the Lakota Grandmothers’ website, “Lakota Elders Truth Tour  (April 1 – April 16+) is a delegation of traditional grassroots Lakota elders and activists who will travel from Pine Ridge Indian Reservation to the United Nations (U.N.) offices in New York, and U.S. Government offices in Washington D.C., to present irrefutable evidence of the ongoing genocide of the Lakota Oyate (Lakota people). Lakota elders and activists will visit 13 cities and speak out to end the genocide of their people and reclaim their traditional matriarchal leadership.  They will also show their incendiary documentary ‘Red Cry.'” The group will be in Madison on April fourth.

For more information about the tour: http://www.lakotagrandmothers.org/truth-tour/