On Thursday March 21st, Rebecca Kemble subbing for Allen Ruff hosted a split show. During the first half of the hour she spoke with Isthmus journalist Bruce Murphy about his cover story, ” The Powerful Pat Roggensack, Ed Fallone faces long odds in ousting a key member of the Supreme Court’s conservative bloc.” During the second half of the show Rebecca spoke with Steve Horn, a writer for The Progressive Magazine, about his article, “Free Market Champion to Take Over as UW-Madison Chancellor.” 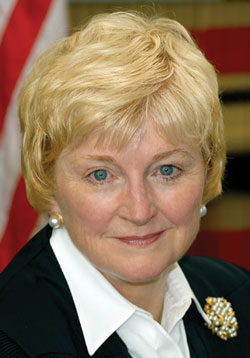 According to the Isthmus article: “Now Roggensack is running for reelection, and her opponent, Marquette University Law Professor Ed Fallone, has cited her handling of this and other decisions in arguing that Roggensack bears great responsibility for a court he says is ‘dysfunctional.’ He also charges it lacks transparency and appears compromised due to decisions it’s made on cases involving large campaign contributions to justices. ‘ think the perception for the public is that the court is for sale,’ he says. Lawyers who practice before the court, some of whom requested anonymity, say that Roggensack has been a key contributor to these problems, and at times has more power on the court than Chief Justice Shirley Abrahamson. ‘She often seems to take the lead on 4-3 decisions,’ says Fallone. On key cases, he says, ‘Everyone was looking to her.’

Roggensack says her ‘heart aches’ because Fallone ‘attacks the court as an institution.’ Her campaign manager, Brandon Scholz, accuses Fallone of ‘essentially trashing the court.’ He adds that Fallone entered the race too late (in mid-December) and lacks the campaign funding to have any chance of winning. ‘They have a lot of work to do. And obviously, they don’t have much time to do it.’ History is on Roggensack’s side: Rarely has an incumbent Wisconsin Supreme Court justice lost an election. So Fallone’s chances are slim indeed. But the issues in this race could hardly be bigger.”

According to Steve Horn’s Article, “On Monday, Rebecca Blank was selected to be the next chancellor of University of Wisconsin-Madison. Blank currently serves as the Acting Secretary of the U.S. Department of Commerce and has worked in the agency since 2009. Commenting her appointment, Blank said, ‘The University is integral to the economic future of the state and must continue to be a strong partner in the effort to create jobs and stimulate economic growth’… Gone are the days when research, teaching, and outreach at UW-Madison were oriented toward improving the health, quality of life, the environment and agriculture for all citizens of the state. Now economic growth and commercialization in the service of “job creators” take pride of place as the institution’s guiding principles, and Blank is well positioned to promote them. Blank has a strong record of developing and promoting neoliberal economic policies that put so-called free markets and the profits of large corporations ahead of the needs of people.”

Read the entire article from the Progressive Magazine, “Free Market Champion to Take Over as UW-Madison Chancellor:”