Madison, prepare for a time warp.  Swamp Thing reunites this Thursday, June 30th, in a WORT benefit at the Crystal Corner Bar, 1302 Williamson Street.  They’ll perform the entirety of their 1985 debut album Learning to Disintegrate, in addition to covers and other Swamp Thing classics.

The quirky ’80s alt-rockers, featuring WORT’s own Jonathan Zarov (host of the Friday 8 O’Clock Buzz), join forces with Yuri Myshkin’s enigmatic Russophile band Optometri.  All proceeds from the show, which starts at 9:00 p.m., will go to expand WORT’s digital archive.

I asked Jonathan Zarov (with an assist from bandmate Steve Bear) a few burning questions about Swamp Thing.  The 1970s DC Comics character of the same name, by the way, is a humanoid-plant hybrid who fights to save the environment from terrorists – an ambitious superhero in an age of climate change.

Joe Crawford Mrazek (for WORT):  What were your ambitions for Swamp Thing (the band) back in 1982-87?

Steve Bear (for Swamp Thing):  I’d say we hoped to achieve a level of status where we’d be able to consistently demand and receive a noodle kugel in our contract rider. It was in the rider, but more as a plea that it would be really nice if the promoter would bring us one. We only got one noodle kugel across those many miles, years, and dressing rooms.

WORT: You’ve called this WORT benefit concert on June 30th a “return-from-oblivion reunion” for both Swamp Thing and Optometri. Did you intentionally fly under the national media radar of the (pre-Internet) 1980s so as to avoid a copyright infringement lawsuit?

Zarov (for Swamp Thing): I sense some snark in this question. However, we did not, in fact, fly under the radar. Our manager, Mike Dorf, received a cease and desist letter from Warner Bros. regarding use of the name “Swamp Thing.” I still have it somewhere. He told them to stick it, more or less, and we kept using the name. I always felt good that we got on Warner Bros. map — that they even deigned to swat at the mosquito that we were. I’d put it on par with the time we got a noodle kugel.

WORT: Are all five original members of Swamp Thing performing at the Crystal Corner next Thursday? How did you make this unlikely reunion happen?

Zarov: Papa Swamp, our sax player, was instrumental in setting the tone of the band, but he left the group shortly before Learning to Disintegrate was recorded. So there were four members for all the recording and touring. All those members will be present – and very much alive (we don’t want to provoke an angry visit from the health inspector). We’re amazed and fortunate to be able to fill a club thirty years after we peaked. We will keep doing this every few years, if people let us.

WORT: Swamp Thing, the slimy green monster with a conscience, once did an anti-littering PSA for Greenpeace. How do you think he’d do as a substitute host on the Friday 8 O’Clock Buzz?

Zarov: He would likely do as well as the current host, who I hear doesn’t even get to the studio until 8:03 am on many Fridays.

WORT: Which makes you feel prouder, in retrospect: having recorded an album, Learning to Disintegrate, with Butch Vig at Smart Studios, or having performed at CBGB in New York City (1987)?

Zarov: To answer that seriously, I’m actually most proud of the moments that happened between four walls in some clubs, some nights, things that we never planned or expected–that we did our thing and reacted to each other and to the people and places where we were, leaving it all on the floor. But it’s hard not to look at the “achievements.” That’s how people gauge if you were actually somebody, for whatever that’s worth.

Recording with Butch was a great experience. He was brilliant and helped us make the record better. And he’s always been a standup, nice guy. But there are a whole bunch of people who recorded with him in the ’80s, and anyone with just a little money could buy that experience back then. Plus, he always liked Killdozer best!

CBGB was a great club. It was a thrill. And we played well there: you can hear us at CBGB in the extended cuts put out with Learning to Disintegrate on CD Baby. But, again, a lot of bands played there. We could say we had a good record review in People (which is pretty weird). Or we played the last show ever at Folk City. We could say the Knitting Factory sprung from our ashes.

Personally, I’m proud that I’ve climbed up the I-beams in the High Noon, chased by two women dressed as Gorbachev and the reanimated corpse of Ronald Reagan, and touched the ceiling during a show. Many of my proudest moments aren’t even exactly musical. Everybody in the band would answer a little differently. But I think we’re all pleased and proud that we were the kind of band for whom someone would bake a noodle kugel (thanks, Mary).

A Brief History of Swamp Thing by Steve Bear 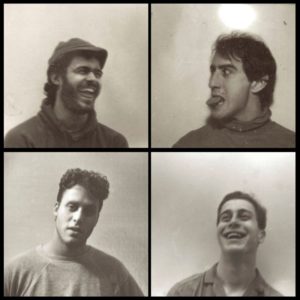 The new Beatles? Swamp Thing! Swamp Thing began in 1982 at UW-Madison. Jonathan Zarov (vocals, guitar & songwriting) and Steve Bear (hitting things with sticks and brushes), had been in the all-rabbit-tune Bunny Band and wanted to try playing songs about people and food. It wasn’t long after, that Bob Appel (vocals, guitar, bass & arranger) and Mike Kashou (bass, vocals, percussion, trumpet, keyboards & oud) joined the band, and off they went, in a van. After living in Madison for a few years, they moved to the East Coast, where it was two steps forward and one step into oblivion.

Prior to achieving disintegration, Swamp Thing released two albums, Learning to Disintegrate (1985) and A Cow Come True (1987), plus two singles, “Trail of Bones” (1986) and “Waiting for the Messiah” (1987). Jonathan is now a master bag player, a long-time Madison resident and a morning radio host. Steven plays a watering can in Brooklyn with Villa Delirium, when they let them out.

After leaving the Swamps, Bob, along with the band’s manager and live sound engineer, started the Knitting Factory in NYC and has since worked in the music, media, and kugel industries. He now lives in San Francisco and plays office parties and special occasions.

Wasting no time, it wasn’t long after leaving the Thang that Mike earned Platinum and Gold Records as bassist on Garbage’s first album. He also played on a Violent Femmes record, toured the world, and makes beautiful food as well as music. He’s also been an active and teaching musician all along.

Rejecting the advice of one record reviewer, the band members opted not to castrate themselves so they couldn’t reproduce, and so today they’re all proud fathers. It’s been a long time coming, but Learning to Disintegrate is now available to the 21st century on CDBaby. Enjoy, and come join us on the 30th at the Crystal Corner.