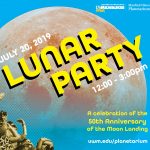 “One small step for man, one giant step for mankind.”  Those words .. missing article and all… were broadcast around the world on July 20, 1969, as Neil Armstrong became the first human being to set foot on the surface of the moon.  Fifty years later, Armstrong’s footprint still remains, thanks to the airless, waterless […]