Two and a half years after former President Mubarak’s resignation, the Arab Spring in Egypt has turned sour. The Egyptian military removed Mohamed Morsi, Mubarak’s elected successor from office in a coup d’etat. The aftermath of the coup has been waves of chaos and death, as Morsi supporters and the Egyptian army have clashed in […] 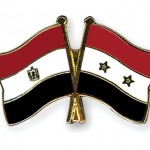 While the death toll continues to rise in Egypt, Syria has also had issues escalate over the past couple of days. It appears that there were unconditional weapons used on villages especially chemical weapons. Civilians have been fleeing villages as the Assad forces continue to use chemical weapons in Syria. Our host Esty Dinur spoke with Professor Stephen Zunes about the turmoil that has shaken this part of the world.

Allen interviewed Rick Rozoff from “Stop NATO.com.” They discussed conflicts across the Middle East and how, according to Rozoff, NATO has exacerbated these conflicts through select and ultimately detrimental intervention.   “Stop NATO is a continuation of an e-mail mailing list started in 1999. Its main purpose is to document and oppose global militarist trends […]