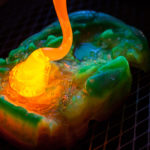 For the past couple years, anyone even remotely engaged with the art world in Madison was bound to bump into artist, educator and activist Carlos Eduardo Gacharná at some point or another. Gacharná’s work harnesses techniques from glassblowing, neon, and ceramics with a beautiful fluidity and an uncanny grasp of texture. But he’s made just as […] 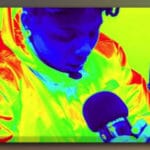 Carlos Eduardo Gacharna came to Madison when he was 7, seeking a better life from his native Columbia.  Gacharna attended multiple schools as his family moved, eventually graduating from Memorial High School and then from the University of Wisconsin Madison Art Department, where he studied ceramics and glass.  As an outsider, art, he says, became […] 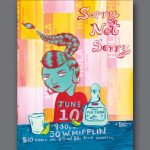 8 O’Clock Buzz host Jonathan Zarov interviews Carlos Eduardo Gacharná, 100arts Manager. Carlos Eduardo Gacharná, 100arts Manager, is a Colombian artist and activist currently serving as the arts organizer for 100state. A graduate of the University of Wisconsin – Madison, he dedicates his professional practice to what he calls ‘reallocating resources’, leveraging his status within […]