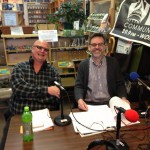 It’s time for the Wisconsin Film Festival! Check out this live-broadcast to hear from the people that made these wonderful films possible!

During the first half of the show, Norm Stockwell interviewed Sharif Abdel Kouddous, Democracy Now!’s Senior News Producer, on the elections in Egypt.  In the next segment David Alvarado discussed Mexican media, upcoming elections and G20 protests in Los Cabos. On Sunday Egyptians participated in a presidential election that many had hoped would mark a […]