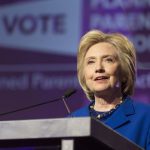 The Democratic party ignores important issues in the 2016 party platform — this according to Rania Khalek from The Electronic Intifada, who live-tweeted the proceeds of the 2016 Democratic National Platform Drafting Committee meeting. Voted down were: single-payer insurance, frac sand mining ban, and sanctions against the Israeli occupation of Palestine.