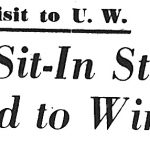 Madison in the Sixties – the last week of April, 1960 19-year-old Jon Micky Hayes is unstable but not insane, doctors say, and so is fit to stand trial for the March 12 first-degree murder of his father, Henry Vilas Zoo Director Harold Hayes. Hayes shot his father and another man to death with a […]