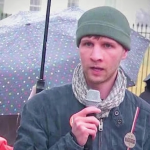 In 2013, former NSA analyst Daniel Hale blew the whistle on the civilian consequences of drone warfare, releasing to the Jeremy Scahill of the Intercept, 17 documents describing the death of hundreds of innocent men, women, and children killed during drone attacks by the U. S. Government. Co-founder of Voices for Creative Nonviolence, Kathy Kelly, […]

Jan Miyasaki, was joined by Bret Coughmen of the National Security program at the American Civil Liberties Union, on Wednesday, March 20, 2013. Jan Miyasaki is the Wednesday host at the 8 0’Clock Buzz. Last week the ADC appeals court rejected the CIA’s secrecy claims in the ACLU’s targeted killing freedom of information lawsuit. Listen […]