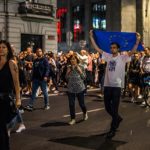 In July, the political party of Law and Justice attempted to dismantle checks and balances in the Polish political system by appointing its own people to the judiciary. In defiance of that, hundreds of thousands of Polish citizens took to the streets to protest, resulting in a brief halt of the forward movement of the […]