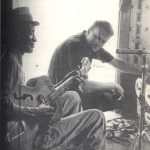 This week I’m doing a two part special on Blues Cruise and Two For the Blues featuring Samuel Charters. Unlike other shows broadcast in this series, Sam Charters was not a blues man.  He was a historian, author, music producer and poet.  He was widely published in the fields of blues and jazz.  He wrote […]