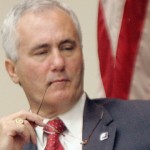 Conservatives have always worried about homosexual agendas and recruiting youth. While many liberals might hope that the era of fearing gays and lesbians is over as a result of things like gay marriage, what’s going on in South Carolina right now shows just how far we have not come despite all of the gay and lesbian movement’s efforts to prove that gays and lesbians are normal, responsible good citizens. At the center of this recent controversy is not only gay rights, but broader questions of economic uncertainty, academic freedom and censorship. Check out this APA to find out more!