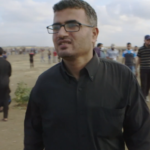 In March 2018, a series of protests called the Great March of Return took place at the Gaza Strip near the Gaza–Israel border. As we approach the anniversary of the march, we examine this momentous event with one of its founders, Ahmed Abu Artema, along with Jehad Abusalim. “Who can refuse justice? Who can refuse […]