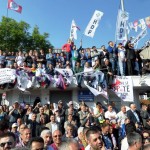 Turkey is off the radar for most Americans but should not be. Bordering Syria, Iraq and Iran, it is right in the midst of unrest in the Middle East. ISIS oil and Jihadis come through its borders–the oil transported to Malta by the Turkish President’s son. The country has renewed its attacks on Kurds, who […]