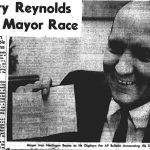 Madison’s first, and most consequential, mayoral election of the sixties almost didn’t happen. But when it did, it changed the course of Madison government and ended the effort to build Frank Lloyd Wright’s Monona Terrace auditorium and convention center. In 1960, Madison Mayor Ivan Nestingen chaired Sen. John F. Kennedy’s campaign during the Wisconsin primary […]