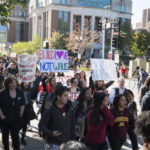 On August 12, 2017, as many as 1,000 neo-fascists, armed with assault rifles, shields, clubs and torches, clashed with anti-fascist counter protestors in the streets of Charlottesville, Virginia.  DeAndre Harris, a special education assistant at a high school, was severely beaten by four men wearing neo-Nazi insignia. Later, after police declared an unlawful assembly, James […]