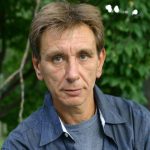 Tonight the Perpetual Notion Machine rebroadcasts a show that originally aired on Feb. 2, 2006. Distinguished professor of anthropology Neil Whitehead was our guest. Generally, Neil studied indigenous peoples in the isolated regions of the Amazon rainforest, and their often brutal tribal practices. Thus, he was interested in the human nature of violence, and wrote […]