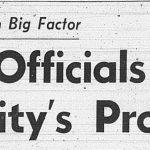 Madison, the second week of September 1969 The future of Madison mass transit is a mass of confusion, as the Madison bus company rejects the city council’s proposed one-year contract. It insists on the three-year contract it negotiated with Mayor William Dyke, or it says it will go out of business when the current contract […]