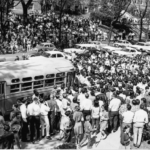 Madison – May, 1967. The Bus Lane Protest Many campuses have been having demonstrations against the war, the draft, and the CIA. But only Madison has a disruptive protest over a bus lane. In 1960 the city announced a ten-year plan to improve University Avenue from Bassett Street to Old Middleton Road, the first phase […]